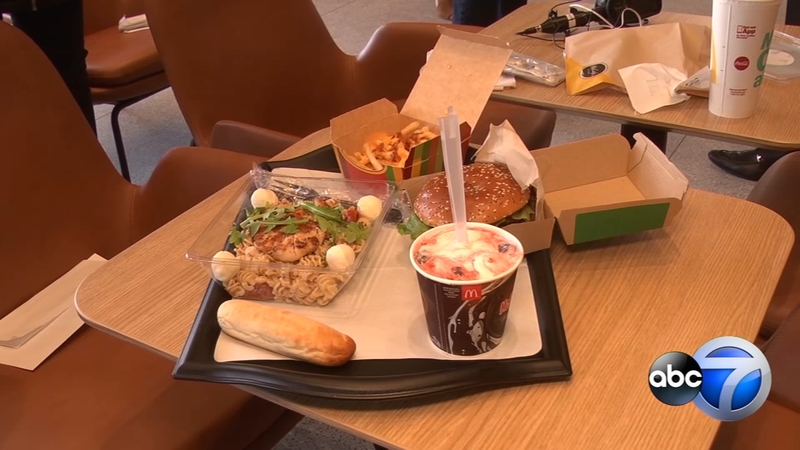 CHICAGO (WLS) -- At the new West Loop McDonald's, dubbed "one-of-a-kind" by the fast-food giant, customers can order more than classics with a global menu on tap.

Food from Australia, South America, and France are among the items available to the public starting Wednesday in the restaurant opening on Randolph Street. The restaurant's location is no coincidence, as it sits on the ground floor of the new McDonald's global headquarters, which opened earlier this year.

Check out some of the newest global menu items that are now available to order at the West Loop McDonald's.

"What can we do to really make our mark both in the neighborhood, in the city, with something that really spoke to the global nature of our business," said McDonald's Chief Communications Officer Robert Gibbs of the thought process behind this unique restaurant.

Gibbs said the company's excited to be close to its customers in the bustling West Loop neighborhood and wanted to capitalize on that access. So McDonald's thought outside the Happy Meal box and drew on the diverse offerings of its 37,000 locations worldwide.

To start, this global McDonald's features "Cheese & Bacon Loaded Fries" from Down Under, a "McSpicy Chicken Sandwich from Hong Kong," "the Mighty Angus Burger from Canada," and salads only found in French McDonald's locations. Plus, there's a Brazilian McFlurry Prestígio to sweeten the deal.

"That global taste from around the world, that's what people are coming here for," hoped Owner-Operator Nick Karavites, whose family owns 25 area locations including this global McDonald's and the well-known Rock 'n' Roll River North location.

Karavites explained that some of the unique offerings, like the Australian McCafé coffees (made with Australian coffee beans) and pastries as well as the Latin American dessert center, will always be available. Added global eats will cycle through, with their countries of origin lighting up on a map, marked by the signature golden arches.

"Once people get in the habit of recognizing that global menu, it's something they'll look forward to," he added.

The location also boasts McDonald's "Experience of the Future," which includes modern décor, table service, touchscreen kiosks and mobile ordering options. The company plans to bring this to most U.S. locations by 2020.

First headquartered in Chicago, McDonald's moved to Oak Brook in the 1970s. It returned downtown to a nine-story HQ with corporate offices and one of seven "Hamburger Universities" worldwide.