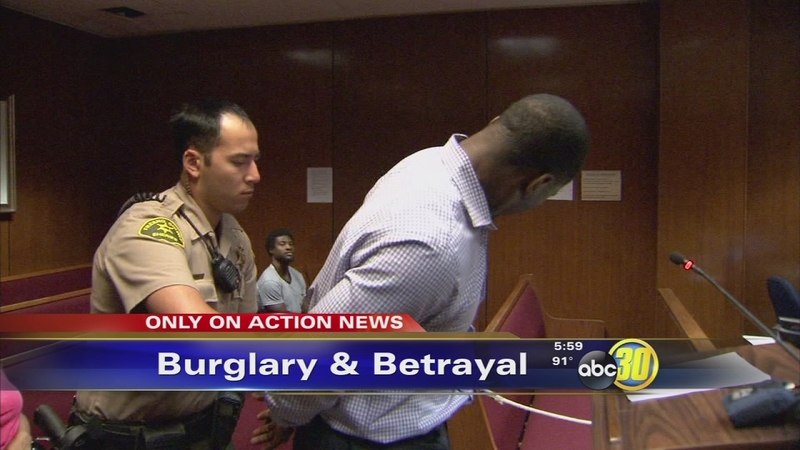 FRESNO, Calif. -- A former Chicago Bears wide receiver has been the victim of a burglary in Fresno, Calif. The suspect was one of the last people Bernard Berrian expected would rip him off.

Berrian investigated the crime on his own before turning it over to Fresno police. The suspect was Berrian's longtime friend, who he met at Fresno State where they played football together.

But instead, a shocked Berrian was speechless, watching the crime unfold, by a burglar he knew, who even brought cleaning supplies to wipe away the evidence.

"I was like, wow, he is a real professional, he takes a spray bottle with him to wipe off fingerprints and a towel."

Just a few weeks earlier, Berrian's home was broken into twice. Police were called, but the trail never led to a suspect because no fingerprints were left behind. On April 28, Berrian was at a barbecue. Therrian Fontenot was there, too.

"It was crazy because we were all sitting around, and he actually left from where we were to go do it," said Berrian. "Boom, motion sensor went off, I get an email, so I click on the live cam."

Fontenot and Berrian go way back. They connected in college on the gridiron and ever since have remained good personal friends. Recently, Berrian had noticed Fontenot had become more inquisitive.

"He would always call me and try to ask me where I was, make sure I was out of town," said Berrian. "If I was home all the time, he'd blow up other friends in the crew asking them the same question, 'Where's Bernard? How come he's not answering his phone?'"

What was taken during the first burglaries made Berrian determined to catch the thief.

No one was ever arrested for the initial crimes due to a lack of evidence. But Fontenot was charged with the one caught on tape. Several weeks ago, he pleaded no contest in a Fresno County courtroom.

"He has accepted responsibility at an early stage of the proceedings in this case. He has shown remorse for his actions," public defender Tomas Kunder said.

Berrian attended the sentencing and wrote a letter to the court describing why the circumstances made him feel so violated.

"I just wanted the judge and the court to know the level of deceit that he went through," Berrian said.

Berrian feels the crime wasn't motivated by malice, but rather Fontenot's desire to live a lifestyle he couldn't afford.

"He tried to keep up with this status that he was this big baller, playing, having a bunch of girls and had money and was traveling everywhere," said Berrian. "But he wasn't doing that on his own, it was other people that were putting him up."

During sentencing, the public defender told the court his client is working toward a better life.

"He is currently involved in what's called NASM Essentials of Personal Fitness Training, where he is studying to be a personal trainer and studying in sports medicine," Kunder said.

The judge ordered Fontenot remanded to serve the rest of his six-month sentence. For Berrian, fair punishment didn't necessarily have to equal jail time. But he did feel some satisfaction watching Fontenot get handcuffed and hauled away.