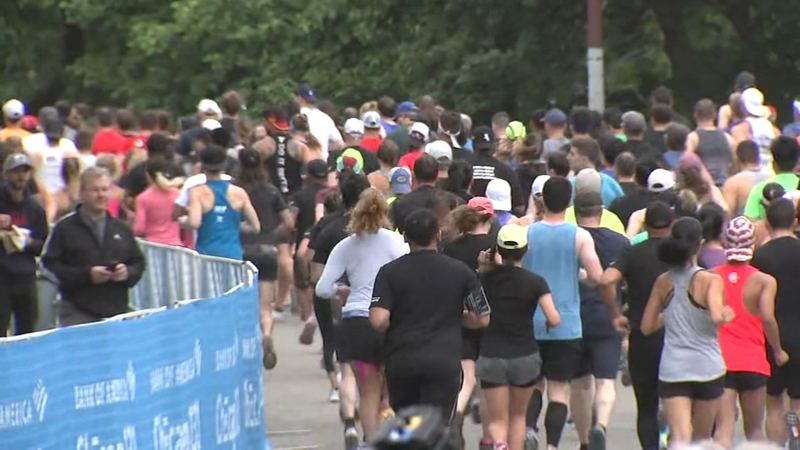 The Bank of America Chicago 13.1 race started at 7 a.m. in Garfield Park on the West Side of the city.

According to marathon officials, about 5,000 runners were registered for Sunday's run.

Leading the way on a course starting and finishing in Garfield Park was a field of talented elite athletes, including three-time Bank of America Chicago Marathon champion Daniel Romanchuk and former Olympian Diane Nukuri.

The flat route took runners through historic parks and boulevards on Chicago's West Side.

Street closures spanned from Douglass Park all the way up to Humboldt Park. The start and finish line was near Warren Boulevard and Washington Street.

A festival followed the race in Garfield Park starting at 8 a.m., featuring entertainment and health and wellness activities.

RELATED: Chicago Bank of America Marathon returns to the city as 1st major race in US since the pandemic

Race organizers were excited to have this happen on the West Side.

"What makes it really exciting is that it really takes us away from where most half marathons are, which is on the lakefront or downtown, and it brings us to the West Side, and I think that's really great," said Jess Vergara, with Viento Little Village Runners Club.

Chicago's newest half marathon is this Sunday.

"We don't always see runs happen on the West Side or the South Side. So to be able to bring a race to the West Side of Chicago to complement what we do downtown is really amazing," Cook said.

Both the men's and women's winners were from out-of-state.

"The aim to come here was to compete, don't worry about time and just execute, trying to win, and really pleased with how today went," men's winner John Dressel said. "It was really nice; the course was great. You never got bored in the course because there were some turns and stuff."

The half marathon brought people from all walks of life.

"It's just fun. It's honestly like pushing your body and testing your limits. And it's totally type 2 fun. And in the moment, you're like, 'oh, my gosh, this totally sucks.' After the fact, it's so fun, and you just keep coming back," women's winner Carrie Verdon said.

The runners practiced for months to take on the 13.1 miles, and the top finishers completed it in just over an hour.

"One hundred-mile weeks, altitude, let the blood do its thing up at altitude -- a lot of work goes into running 13.1 miles," Dressel said.