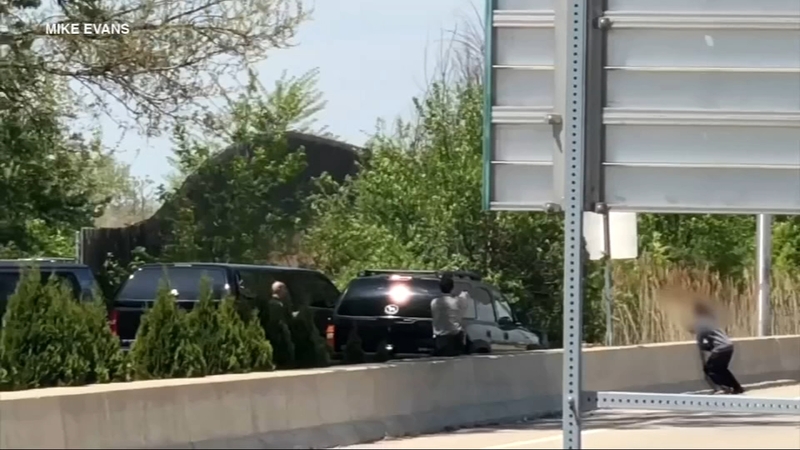 LAKE COUNTY, Ill. (WLS) -- The Lake County Major Crime Task Force has determined that a woman who was shot to death by police along US-41 in north suburban Gurnee Wednesday was involved in an earlier incident in nearby Antioch.

The Lake County Coroner's office has identified the woman as 31-year-old Makell Meyerin of Antioch.

Police have also charged 37-year-old Jordan J. Huff of of Antioch Township with aggravated fleeing and eluding and criminal damage after he rammed a vehicle into an Antioch squad car.

"This was certainly a very tangled web of events. You got two very unique out of character instances where an individual is firing a long barrel firearm at two different times of day, two different locations," said Sgt. Chris Covelli, spokesperson for Lake County Major Crime Task Force.

The first crime scene started in Antioch. Early Wednesday morning, investigators say they got reports of suspicious vehicle with a male driver and female passenger.

Covelli said, "The information they had is somebody was going door-to-door soliciting asking for money."

When Antioch officers tried to conduct a traffic stop, the male driver refused and instead rammed the police squad car and sped away. But that's not all.

"A witness reported that there were shots fired from the offending vehicle," Covelli said.

Police are still working to confirm that detail but say the car was later found at a residence in unincorporated Antioch where an eight-hour standoff took place before a man and woman were taken in for questioning.

Covelli said the man was not involved, but owned the car used in the incident.

The woman was the third passenger in the car.

As for the other two?

"They were able to flee the unincorporated Antioch residence prior to police officers arriving," Covelli said. "The two of them subsequently entered a Toyota Prius. The Prius is owned by a relative of the male."

ABC7 stopped by the home registered to the white Toyota Prius but the person who answered the door declined to comment.

That white Prius was later spotted Wednesday afternoon in Gurnee where officers were called to respond to two unconscious people inside the car. Those two people have been identified as Meyerin and Jordan J. Huff, who rammed the police car earlier in the day.

Covelli said the Prius was stopped at a stop sign near the intersection of Harper and Gould for an extended period of time, forcing drivers to go around.

When paramedics arrived, they attempted to engage with the female driver, but she drove away with the unconscious man inside. She crashed into a Gurnee fire truck and crashed again at Chittenden Park near Route 41.

Meyerin then ran away leaving the male unconscious inside the car.

Authorities later found Meyerin standing in the southbound lanes of Route 41 waving a long barrel firearm and, at one point, investigators said prior to them blocking the roadways, she approached a passing car with the gun. The driver of that car told investigators and then they maneuvered around her and got away.

Witness video obtained by ABC7 showed her erratically standing on the highway surrounded by officers.

Covelli said the firearm she was holding looks similar to a rifle and fired .45 caliber ammunition.

Meyerin was pronounced dead shortly after she was taken to a hospital in Libertyville. The Lake County Coroner's office said preliminary autopsy results indicate she died from multiple gunshot wounds and that toxicology results were still pending.

The man is now in police custody at the Antioch police department.

"He was released back into police custody last night. He is currently in custody at the Antioch police department. He has not been charged at this point but charges are very possible," said Covelli.

In the most recent press briefing, Covelli said there were more connections between the two incidents including relationship between the man and woman taken in for questioning in Antioch and two suspects. He said all four people knew each other and resided together in the home where Antioch police conducted the eight hour standoff and subsequent search.

Officials said the officers involved in the shooting have been placed on administrative leave pending investigation.