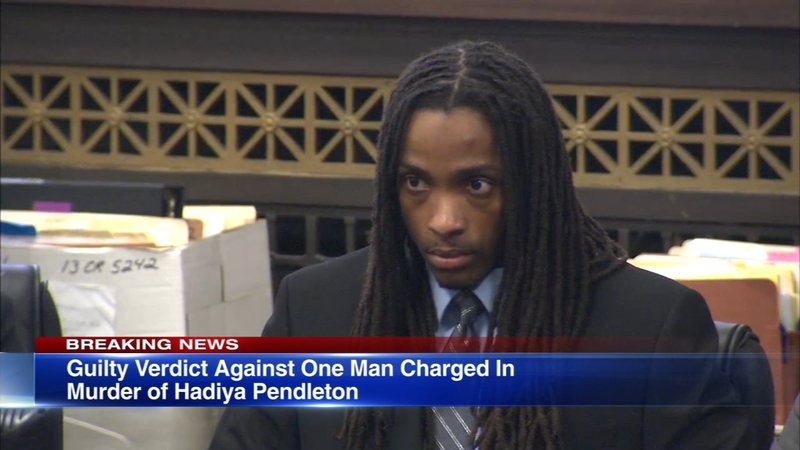 CHICAGO (WLS) -- One of the men on trial for the 2013 murder of Hadiya Pendleton was found guilty by a jury Wednesday.

Kenneth Williams, 25, was found guilty of first degree murder of 15-year-old Hadiya Pendleton and guilty of aggravated battery to her friends, Sebastian Moore and Lawrence Sellers, who were both wounded in the shooting.

He was accused of being the getaway driver on the afternoon when Pendleton was shot to death as she and several other students visited a park at the end of a school day.

The Pendleton family was tearful as the verdict was read. They left court Wednesday emotional-- five years after the murder. They declined to comment.

Their trials were held simultaneously as many of the witnesses and evidence is similar. But their defense differed.

Williams' attorney argued no evidence connected him as the getaway driver.

Williams' uncle says some of the witnesses were coerced to connect Williams to the shooting.

"Don't know if it was coerced... because this person named Michael accused my nephew. My nephew wasn't there, nowhere near inside the house or nowhere inside, but just caught him outside. Jumped inside the car and just told him to drive," said Michael Beal, the uncle of Kenneth Williams.

The case against Williams was circumstantial; there was no physical evidence or eyewitness ID.

"They ain't got no evidence, so they found my nephew guilty for something he did not do," Beal added. "They have no fingerprints. They ain't got no gun, no pistol, no gun."
Williams' lawyer, Matthew McQuaid, argued the jurors should not be swayed by emotion.

McQuaid said many prosecution witnesses were under pressure to testify, making their testimony unreliable.

"They're saying whatever they have to say to get out of the police station," he argued.

Some of the witnesses who testified at trial disputed their previous grand jury testimony in which they implicated the two suspects.

Williams and Mickiael Ward were accused of shooting into a group of teens at Harsh Park in Chicago's Kenwood neighborhood in January 2013, killing Pendleton and injuring two others. Prosecutors said it was a botched attempted at gang retaliation.

Pendleton was a high school sophomore and an honor student who had performed with her school's marching band at President Obama's second inaugural parade.

Williams and Ward, who were both 18 at the time, were being tried together but with two separate juries at the Cook County Leighton Criminal Courthouse in Chicago.

Williams lowered his head upon hearing the verdict.

Prior to closing arguments Wednesday, Williams' legal team called a single witness, a professor of urban studies who testified that some young people participate in gang rap videos but are not gang members.

After that testimony, the judge asked Williams if he wished to testify in his own defense. Williams declined.

In closing arguments, Cook County Assistant State's Attorney Brian Holmes told the jury that he was just as culpable in Pendleton's death as the alleged gunman.

"He's the driver of a drive-by. Did he help? Did he aid? Yes. You cannot have a drive-by without a driver," he told jurors.
Prosecutors presented a video recording of Ward confessing to police. Early on, Ward can be seen denying shooting into the park and a detective continuously accusing him of lying. At one point, Det. John Murray reminded Ward that Michelle Obama attended Pendleton's funeral. An attorney for Ward, Gina Piemonte, noted the detectives raised their voices, swore and occasionally got physically close to Ward.

Closing arguments will be presented to Ward's jury on Thursday.