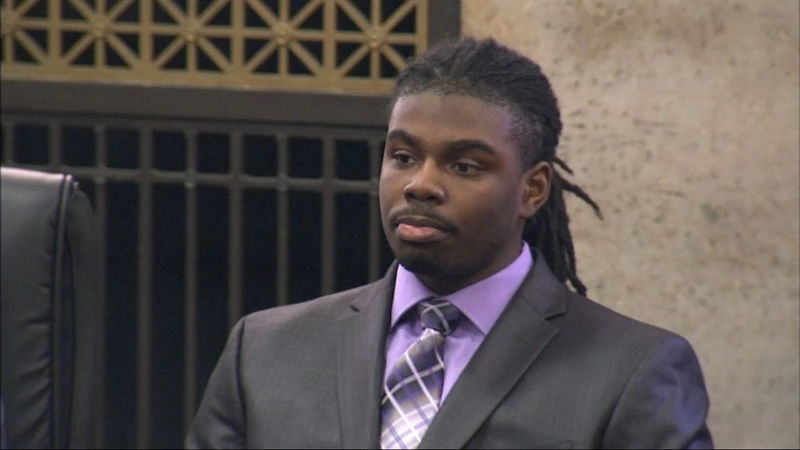 Ward was charged as the alleged gunman who fired on a group of King College Prep High School students in Harsh Park in the Kenwood neighborhood five years ago. Pendleton was killed. Moore and Sellers, also students, were injured.

After the verdict was handed down, Pendleton's parents spoke outside of the courtroom.

The family of Hadiya Pendleton reacted to the guilty verdict Thursday.

"My tears today are because I feel like finally, something positive in our life has happened, as a result of our daughter being gone. There is justice for Hadiya now, because she did not deserve that," said Cleopatra Cowley, Hadiya's mother.

"It's surreal. It's something we've been waiting on for over five years," said Nathaniel Pendleton, Hadiya's father. "We got justice."

A jury has found Mickiael Ward guilty of first degree murder in the 2013 death of Hadiya Pendleton. Ward was also found guilty of aggravated battery to Sebastian Moore and Lawrence Sellers, who were both wounded in the shooting.

"The police officers sat on that stand and lied. They lied about so many things. And I'm disappointed in our criminal system," said April Ward, Mickiael's mother. "I'm disappointed how they just harassed these kids into a confession, witnesses. I'm disappointed, and I'm upset, and I'm hurt."

The jury began deliberations at approximately 1:15 p.m. and lasted for over three hours.

In closing arguments, prosecutor James Papa told jurors the combination of testimony, surveillance video and cell phone data puts Ward at Harsh Park as the shooter was carrying out revenge on who he thought were rival gang members. But the last few minutes of a videotaped police interrogation with Ward was a key piece of evidence.

"You got to see with your own eyes and with your own ears hear and see his words. What he said to detectives about what happened on the afternoon of the 29th," Papa said.

Gina Piemonte, a Cook County Assistant Public Defender who was on the team that represented Ward, argued that detectives ignored other leads and the state's witnesses were not believable. She also argued that the videotaped interrogation was coerced.

"There was real, real pressure in this case to solve the crime and to solve it quickly, so what happened? The police formed a theory very, very early on in the investigation," said Piemonte.

Thursday morning the judge granted motion to eliminate wording that witnesses "identified or positively identified" Ward from a lineup. The defense argued that witnesses thought Ward was "similar" to the person who they thought pulled the trigger.

Williams lowered his head when the verdict was delivered. Williams and Ward had simultaneous trials but each with their own jury.

Pendleton, a sophomore honors student, had performed with her high school band at former President Barack Obama's second inauguration a week before she was killed in January 2013.

She and her friends were taking shelter from the rain in Harsh Park, which is located about a mile from Obama's home in Chicago's Kenwood neighborhood, Ward allegedly got out of a car driven by Williams and opened fire.

Police said Pendleton was not the intended target. Ward and Williams were both 18 at the time.

The case against Williams was circumstantial, with no physical evidence or witness testimony tying him to the crime scene.

"He's the driver of a drive-by. Did he help? Did he aid? Yes. You cannot have a drive-by without a driver," said Brian Holmes, Asst. Cook County State's Attorney.

Many members of Williams' family were in disbelief.