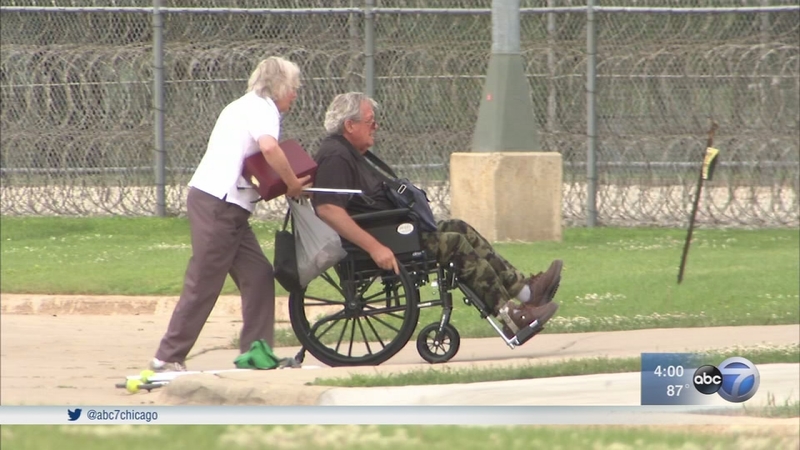 CHICAGO (WLS) -- Former U.S. House Speaker Dennis Hastert was released from prison in Minnesota, according to the Federal Bureau of Prisons.

The release of the 75-year-old was unannounced and confirmed by the authorities nearly 24 hours after his departure on Monday.

Early Tuesday, the same family SUV that dropped Hastert off in Minnesota last summer pulled into the long drive of his family house in wester suburban Plano. Wife Jean Hastert drove the vehicle into the garage and the door came down. Hastert was not seen.

Thirteen months ago, Jean Hastert wheeled the former congressman - who was at one time second in succession to the presidency - into a federal prison in Rochester, Minn.

The details of Hastert's prison releases are not considered public information. His family and attorney did not comment Tuesday afternoon.

Scott Cross, one of Dennis Hastert's alleged victims, said he was disappointed in his early release.

Hastert returns to the Chicago area for a month of home confinement. He was processed through a Chicago halfway house management center, however he is believed to be staying in his own house under federal monitoring for the next month.

Hastert was sentenced to 15 months in prison in April 2016 in a banking violations case that revealed accusations he had sexually abused teenagers while coaching wrestling at a suburban Chicago high school.

Hastert pleaded guilty to paying millions in hush money to a man he had sexually assaulted as a teenager.

"Hastert falls into sort of a different category that had nothing to do with his political career but it's still somebody who thought he was above everybody because he was a powerful politician," Richard Kling, of the IIT Chicago-Kent College Of Law.
ABC7 legal analyst Gil Soffer, a former federal prosecutor, said Hastert still has civil lawsuits to fight and he is not completely free of the criminal case.

In addition, Hastert has to soon begin sex offender treatment as part of his sentence and will be pressed for a deposition in the civil suits against him by two sex abuse victims.

Scott Cross, one of Hastert's alleged victims, told CNN on Tuesday that he was disappointed in his early release, but was focused on moving on.

Cross was a Yorkville High School senior when Hastert allegedly molested him nearly 40 years ago.