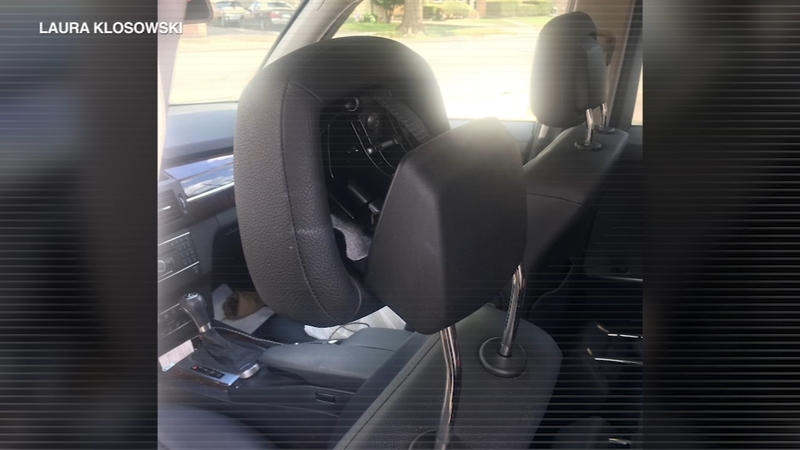 FOREST PARK, Ill. (WLS) -- A Forest Park woman says her headrest deployed while she was driving, hitting her in the head and caused her injuries.

Laura Klosowski was driving in her 2012 Mercedes Benz GLK 350, when she says out of nowhere something violently struck her in the back of her head.

"It struck me with such force," Klosowski said. "I was, I was in shock."

She said she thought someone hit her car from behind, but when she managed to pull over. She says she saw her headrest had deployed on its own.

"I still have pain in my head, in my neck, numbness and tingling in my hands," she said.

The Neckpro Headrest, also known as an "active head restraint," was designed to spring forward to protect drivers' heads in the event of a collision. But the Klosowski says in her case, the headrest deployed on its own, spontaneously, without a crash. She went straight to the hospital.

In a class action lawsuit against Mercedes-Benz, consumers in Florida claim the carmaker is knowingly selling vehicles with defective headrests.

The lawsuit claims, "The force of the impact not only causes serious bodily harm to the head and neck, but also creates a risk of collision when the headrest deploys-suddenly and without warning-while the vehicle is being driven."

In a statement, Mercedes said, "We believe the lawsuit relating to NeckPro in certain Mercedes-Benz vehicles are without merit, and we intend to vigorously defend against them. We stand behind the quality of our products. Please understand that we do not comment further during ongoing proceedings."

Klosowski says this is troubling to her and says Mercedes is now charging her over $800 for diagnostic testing on a luxury vehicle that she thought she could trust.

"I felt like I would just take the car into Mercedes and they would resolve the issue-that did not happen," she said.

She said Mercedes did put her in one of their loaner vehicles, but she said she drives with the seat back out of fear the headrest will deploy again. She said Mercedes called her stating they thought the repair was complete.

The I-Team has learned Mercedes isn't the only carmaker with complaints about deploying headrests.

The NHTSA has opened a preliminary evaluation into complaints about Chrysler headrests.

Chrysler has released a statement saying, "FCA US vehicles meet or exceed all federal safety requirements. Customer safety is a top priority at FCA US. Active head restraints enhance vehicle safety. Evaluations confirm that even in the rare event of inadvertent deployment there is no unreasonable risk of injury. Absent such risk, there is no safety defect. FCA US strongly objects to any alternate characterization."