Heather Heyer's mom Susan Bro tells crowds in Charlottesville 'it's not all about Heather...it never was' 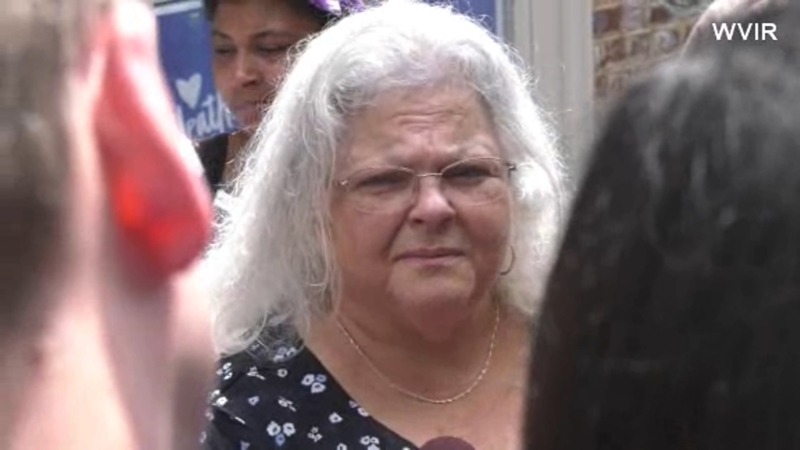 Heather Heyer's mom speaks in Charlottesville: 'It's not all about Heather'

CHARLOTTESVILLE, Va. -- The mother of Heather Heyer visited the site in Charlottesville, Virginia, where her daughter was killed last year and urged supporters to keep up Heyer's fight against racial inequities.

Heyer, 32, was killed on August 12, 2017, when a suspected neo-Nazi drove his car into a crowd of people protesting a white nationalist rally in downtown Charlottesville. Nineteen others were injured in the attack.

On Sunday, Susan Bro said her daughter wouldn't want to be the center of attention on the one-year anniversary of the deadly protests.

"Focus on the issues -- that's exactly what Heather would say. 'Quit looking at me, look at the issues,'" Bro said. "We have a huge racial problem in our city and in our country. We have got to fix this, or we'll be right back here in no time."

Numerous anniversary events took place this weekend in and around Charlottesville against the backdrop of a heavy police presence -- a stark contrast from last year, when white supremacists and neo-Nazis flooded the streets and law enforcement was criticized for being slow to respond. City officials denied requests for event permits, including one from Jason Kessler, who wanted to hold a "Unite the Right 2" rally in the same place as last year. Instead, he moved the rally to Washington.

In Charlottesville, a makeshift memorial adorned with flowers was created on 4th Street close to where Heyer was struck. Messages of remembrance were written in chalk in the street and on the walls of nearby buildings.

Supporters linked arms to form a barrier around Bro as she walked to the memorial Sunday afternoon a few minutes before the time her daughter was hit one year ago. She placed a bouquet of flowers at the site before she and others broke into song:

It's been a long day without you my friend and I'll tell you all about it when I see you again.

Bro said the song, Wiz Khalifa's "See You Again," helps her get through tough times. It tends to come on the radio when she needs to hear it, she said, as if her daughter were sending it to her.

What happened at the 2017 "Unite the Right" rally was bigger than Heyer's death, just as this year's events should be, Bro said.

"The world went crazy when Heather lost her life, and that's not fair, because so many mothers lose their children every day, and we have to fix that. I don't want other mothers to be in my spot," she said, her voice breaking with emotion.

Last year's "Unite the Right" rally was launched to voice opposition to the renaming of two parks honoring Confederate generals. The event drew white nationalists, neo-Nazis and members of the Ku Klux Klan as well as counterprotesters, including Heyer. Both sides clashed before police dispersed the crowds.

Anniversary events this year in Charlottesville have been largely peaceful. Tensions flared Saturday night between protesters and law enforcement during a rally that began at the University of Virginia and ended a few blocks away from a secure area downtown.

Bro said she was uneasy about making a public appearance on Sunday after Saturday's rally. "But I haven't chickened out yet," she said. She's grateful for the increased police presence after last year, she said, but the sheer scale was "a little bit of overkill," she said.

Ultimately, she was glad she showed up on Sunday, she said. Survivors of last year's rally are still struggling to talk about what happened, and she hopes she can play a part in their healing.

"What happens every time in a group situation like that is I come in, needy people feed me with their energy and then I'm feeding it back out to them," she said.

"It becomes this real flow of energy and I always leave healed and hopefully bring some healing and compassion to others."

As of 4 p.m. on Sunday, four individuals have been arrested in connection with incidents in and around downtown Charlottesville.

Jesse T. Beard, 42, of Charlottesville, was arrested by Virginia State Police on one count of obstruction of free passage.

At approximately 11:04 a.m., Beard deliberately positioned himself in front of police motorcycle units, which were attempting to provide safe passage for a group of demonstrators in the area of Preston Avenue and Eighth Street. He was released on a summons.

Martin E. Clevenger, 29, of Spotsylvania, and Veronica H. Fitzhugh, 40, Charlottesville, were arrested by Virginia State Police on one count each of disorderly conduct.

Around 11:25 a.m., Clevenger approached Market Street Park and stopped to the salute the Lee statue. A small group gathered around Clevenger and began to verbally engage with him. During that exchange, a verbal altercation between Fitzhugh and Clevenger became physical. Both individuals were released on a summons.

Chloe J. Lubin, 29, of Portland, Maine, was arrested by Virginia State Police on charges of assault and battery, disorderly conduct, obstruction of justice and possession of a concealed weapon.