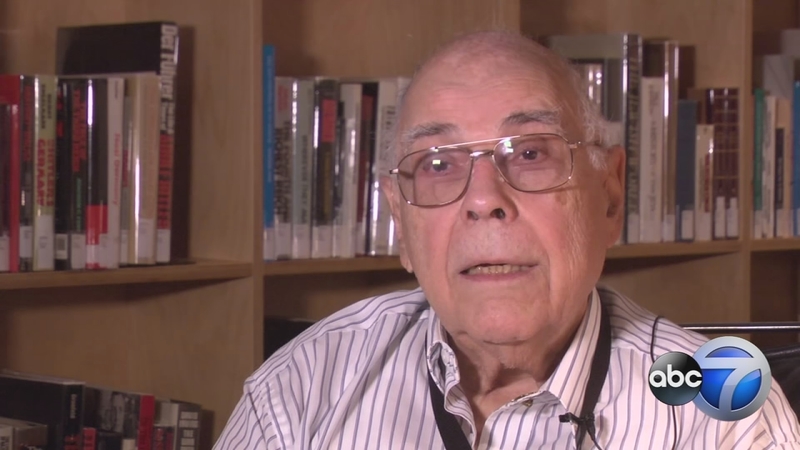 "I want people to recognize that you cannot simply ignore things. You've got to take a stand," the 88-year-old emphasized at the Illinois Holocaust Museum & Education Center on Tuesday.

A docent and regular speaker there, Stern often meets with school children to retell life as a young Jewish boy in Nazi Germany.

He vividly remembers Kristallnacht, known as "The Night of Broken Glass." Over the course of November 9 and 10, 1938, Nazis and their sympathizers trashed Jewish businesses and burned synagogues. The SS and Gestapo, according to the United States Holocaust Memorial Museum, rounded up roughly 30,000 Jewish men as well.

The morning after these pogroms, unaware of what had happened, 8-year-old Frank Stern "took the street car as usual" on his way to school. He noticed fire trucks near a synagogue, but pointed out that "to an 8-year-old fire engines are interesting," not something to fear.
He arrived at the school only to learn it was indefinitely closed. Later that day at the Sterns' home, two Gestapo men "burst into the apartment," looking for Frank Stern's father and older brother. Luckily, Stern's father was sick in bed, so the Gestapo let him stay with a medical certificate; Stern explained that his brother was born in Switzerland and couldn't be arrested as a foreign national.

Shortly after the terrors of Kristallnacht, the Stern family traveled to England by way of Switzerland. Throughout this time, Stern said, the family was waiting for their visa quota number to come up so they could settle in the United States; they finally made it to America in 1940.

Decades later, Frank Stern shares this chapter of his life succinctly, bluntly and if you can believe it, sometimes with a smile. There is no anger in his face or voice as he explains what public transportation was like in 1930s Frankfurt: "Every once in a while somebody would spit at you, kick you, call you a 'dirty Jew.'"

"Life goes on and you might as well look at it from a positive point of view," said Stern, acknowledging that there were also good people in those dark times who deserve recognition.

Overall, Stern hopes to teach people about dehumanization, which he says cannot ever be permitted.

"Dehumanization leads to genocide and genocide is not acceptable," Stern warned.

This Saturday, International Holocaust Remembrance Day, is certainly an appropriate time to reflect on these tragedies. But Stern encourages people to keep an open mind and participate in dialogue at all times so tomorrow can be brighter.

" Nobody has an absolute truth...let other people speak, maybe there's something you can learn," Stern said with a smile.

The Illinois Holocaust Museum & Education Center has multiple events scheduled for this weekend, including another survivor sharing his story. Ralph Rehbock will speak at 12:30 p.m. Saturday. On Sunday, a new exhibit on the Warsaw Ghetto Uprising's 75th anniversary officially opens. The displays include three Skokie area survivors' stories.

You can see a full list of events here.