Mandatory evacuation within 1-mile radius, advisory to wear masks for anyone outside within 3 miles, officials say
WLS
By Diane Pathieu and ABC7 Chicago Digital Team 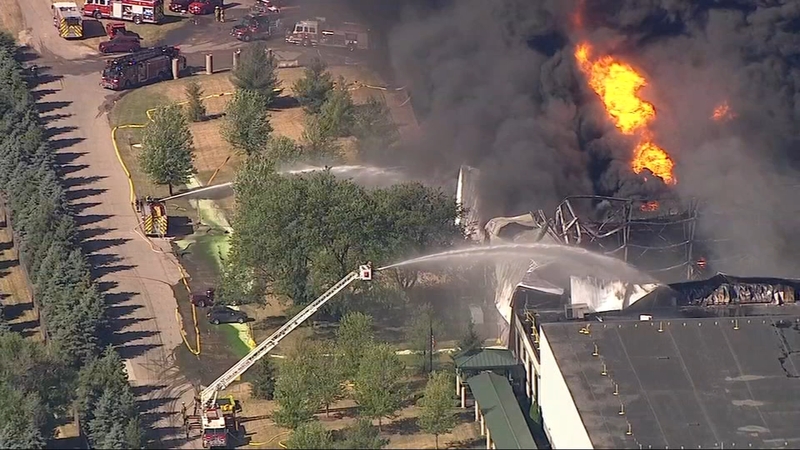 ROCKTON, Ill. (WLS) -- Rockton fire officials say they now have the upper hand on the massive fire at the Chemtool chemical plant.

The chemical plant went up in flames Monday morning. Chopper 7HD flew over that spot Wednesday morning and a few hot spots were still visible.

Rockton Fire Chief Kirk Wilson said Wednesday morning that the fire is contained, but flare-ups may occur as firefighters move building material around in order to fully extinguish the fire.

Chief Wilson said the fire is contained and that no hazardous materials have ended up in nearby waterways.

Local and federal authorities give an update on the evacuation order after a massive fire at a Rockton chemical plant.

During a press conference Wednesday afternoon, officials said air quality measurements remain stable. Authorities said they are testing random samples of particles that fell on homes, parks and roofs within the evacuation zone, as well as monitoring water quality.

To be safe, the one-mile evacuation order remains in effect Wednesday. Public health officials dropped a mask recommendation for anyone within three miles of the fire Wednesday, but still urge mask-wearing by anyone with lung issues or underlying conditions.

As residents clean up, they're being told not to touch any chunks of debris that fell outside of the evacuation zone with bare hands.

Tuesday, fire crews poured a special foam on the ruined structure. Earlier, crews dug trenches, south and west of the Chemtool plant to prevent contaminated runoff from entering the nearby Rock River, a critical source of water.

Chemtool, which produces industrial lubricants, says all of its 70 employees were able to evacuate without injury.