1 year after US Capitol riot, IL representatives say memories of chaos on House floor vivid as ever 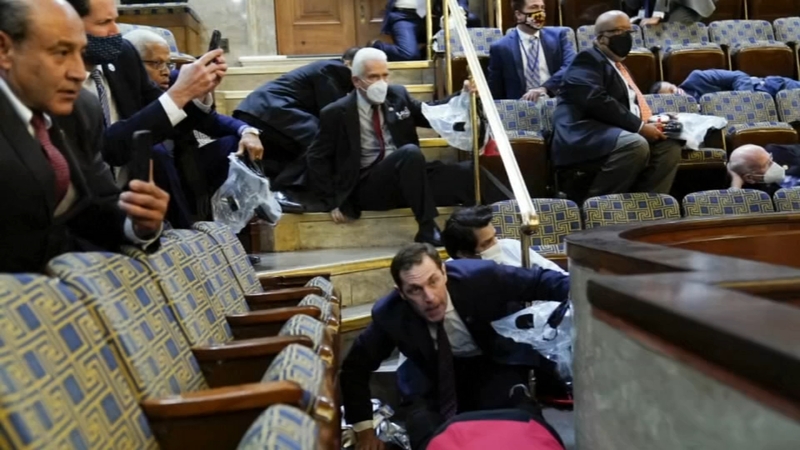 CHICAGO (WLS) -- On the eve of the one year anniversary of the January 6 riot at the U.S. Capitol, members of the Illinois congressional delegation who were caught in the middle of it say the memories are as vivid as ever.

The images of the U.S. Capitol under siege by Trump supporters the day Congress gathered to certify the 2020 elections results are still seared in the minds of many.

Illinois representatives Robin Kelly, Mike Quigley and Brad Schneider were among those in the House Gallery who were caught in the chaos.

"Then all of a sudden it was you know, get your gas mask. We've been breached, you know, you may have to hide under your chair," recalled Rep. Robin Kelly (D-2nd District).

"We were surrounded up in the balcony and if it's fight or flight and you don't have flight, I was honestly how am I going to make a weapon or something, because they were at the door, and it just it seemed inevitable that they were going to come inside," said Rep. Mike Quigley (D-5th District).

"I was working to keep my colleagues calm and just get us into to a safe place. And I actually at the time never really felt that we were going to be overrun," said Rep. Brad Schneider, (D-10th District).

At the time none of them realized the extent of what was happening inside the capitol, right outside the chamber. But they all managed to evacuate safely.

One year later more than 700 rioters have been charged. At least 172 have pleaded guilty. A special House committee continues to investigate.

Senator Dick Durbin was also among those evacuated from the capitol.

"We were changed by this and those who deny it and those who deny that it has any importance in the history of this country really are doing a great disservice not only to our constitution but to our children," said Sen. Dick Durbin (D-Illinois).

RELATED: Still a Jan. 6 mystery: Who placed the pipe bombs the night before the Capitol attack?

"We need to be able to pull the country together as one nation, and we can't do that until we have an understanding of what happened on January 6th holding those people to account," said Rep. Schneider.

Downstate Republicans Rodney Davis and Darin LaHood were unavailable for interviews, but issued statements condemning the violence, calling for accountability, but criticizing Speaker Nancy Pelosi for politicizing the investigation.

"As I said in statements following the events of January 6, 2021, it was a terrible day for our country and our democracy. We are a nation of law and order and individuals who committed crimes should be held accountable, which federal authorities continue to pursue. It is disappointing however, that Speaker Pelosi's unprecedented refusal to allow Republican-appointed members to serve on her partisan select committee has turned efforts to ensure the security of the Capitol and our government into a partisan circus," said Rep. LaHood's statement.

"January 6 marks one year since the riots at the Capitol. The actions of those who breached the Capitol were lawless and wrong. Those who broke the law that day should be punished as the law requires and face the consequences of their actions. As the top Republican charged with oversight of the Capitol Complex's security, it pains me to say that we are in no better position to avoid a similar breach of the Capitol today because Speaker Pelosi has failed to address the serious security vulnerabilities that still exist. The Democrats have been more interested in exploiting January 6 for political purposes and pursuing phony investigations of President Trump instead of securing the Capitol. That's why I voted no on and have consistently spoken out against Pelosi's sham January 6 Select Committee. I will continue to hold Speaker Pelosi and the Democrats accountable for playing politics with the Capitol's security," said Rep. Davis's statement.
Report a correction or typo
Related topics:
politicsdonald trumpriotus capitolu.s. & world2020 presidential electioncongress
Copyright © 2022 WLS-TV. All Rights Reserved.
US CAPITOL
Oath Keepers leader charged in Jan. 6 Capitol attack
Kevin McCarthy says he won't cooperate with Jan. 6 committee
Ted Cruz apologizes for describing Jan. 6 attack as terrorism
Chicago pastor joins hunger strike on Jan. 6 insurrection anniversary
TOP STORIES
At-home COVID-19 test request website goes live 1 day early
Man wounded in shootout with University of Chicago police: CFD
Teens allowed to drive big rigs in new federal program
Lightfoot returns to public events 1 week after getting COVID
Girl, 11, and teenage boy, 16 wounded in shooting in West Pullman: CPD
Texas synagogue survivors trained by Chicago-based security nonprofit
ComEd warns of impersonators trying to steal customers' info
Show More
Hairstylist killed while looking for parking at work in Chicago Lawn
IL reports 20,483 new COVID cases, 36 deaths
Final goodbye for Aurora officer who died from COVID
'Frozen' musical nearing end of Chicago run
AT&T, Verizon pause some new 5G after airlines raise alarm
More TOP STORIES News