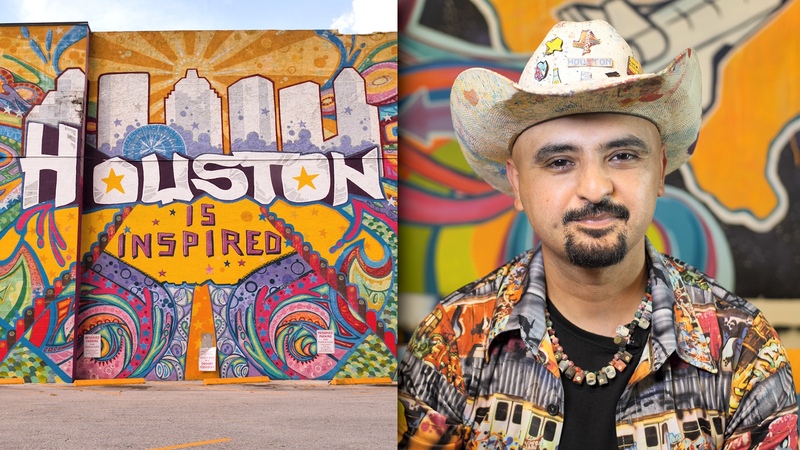 HOUSTON, Texas -- When street artist GONZO247 was growing up in Houston's East End, graffiti was considered vandalism rather than art.

He started experimenting with spray paint as a teen, at a time when most graffiti artists were incognito. But when he decided to turn his passion for street art into his life's work, he struggled to get recognition as a legitimate artist. That's when he made it his mission to change the perception of graffiti.

His colorful artwork can be seen all over the city, from the Houston Public Library to NRG Stadium and the George R. Brown Convention Center. He recently came full circle, when he was commissioned to repaint a historic East End mural that inspired him as a teen. He worked alongside the original artist, Leo Tanguma, to restore the iconic "Rebirth of Our Nationality", which documents the history of the Mexican people.


"Art is who I am, art is what I do, and I think that's what I'm going to continue to do until I am no more," he said. "And if it wasn't for the East End, I'm not sure I would have found that catalyst to make me who I am today."
Report a correction or typo
Related topics:
houstonartsocietygraffitiabc13 plus east endabc13 plusktrklocalish show (lsh)localish
ABC13 PLUS EAST END
Folklorico group celebrates Hispanic heritage with dance
This version of Santa wears a zoot suit and has a lowrider
East End cafe became BBQ spot after owner won it in dice game
Meet H-Town's spray paint Picasso!
TOP STORIES
LIVE: TX school shooting leaves at least 19 children, 2 adults dead
Uvalde school shooting: What we know about 19 kids, 2 teachers killed
Beto O'Rourke confronts Texas gov. at Uvalde shooting press conference
Man set on fire in downtown Chicago: CPD
Teen boy charged in shooting near CTA Red Line: CPD
Access issue possible in Texas elementary school shooting: expert
Father of Texas yoga instructor accused in cyclist's murder speaks out
Show More
Texas school shooter bought 2 rifles within days of turning 18
Indiana Pastor Lowe admits 'adultery'; woman said she was a teen
Girl, 2, killed in Roseland apartment fire
City Council meetings to take up Chicago casino, violence
La Grange Park first responders reunited with baby they delivered
More TOP STORIES News