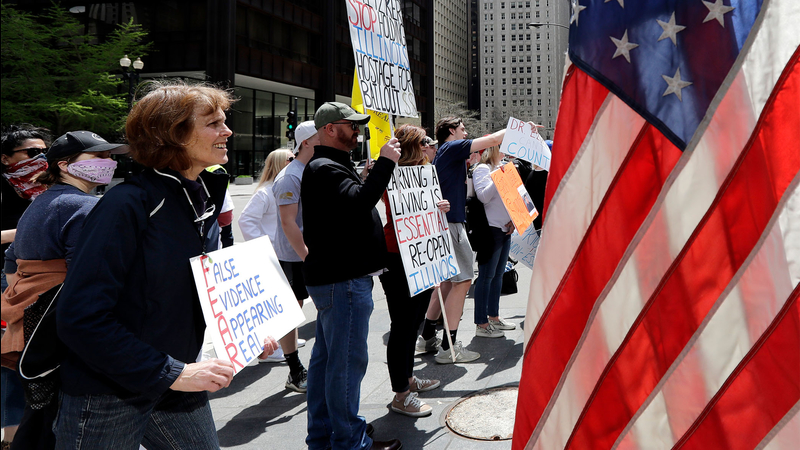 CHICAGO (WLS) -- City and state leaders have warned against it, but some Chicago area churches still planned to have in-person service Sunday, defying the governor's stay at home order, as the state's COVID-19 case count surpassed 94,000.

Illinois health officials announced 51 additional deaths and 1,734 new cases of COVID-19 on Sunday. That brings the statewide total to 94,191, including 4,177 deaths.

Within the past 24 hours, laboratories have reported 20,295 specimens for a total of 581,944. The statewide seven-day rolling positivity rate is 15%.

Mayor Lori Lightfoot said she has reached out to city churches that planned to reopen Sunday and is making clear she has no problem enforcing the stay-at-home order.

Friday Gov. JB Pritzker said every region of the state continued to meet the positivity rate benchmark, including the Chicago area.

The positivity rate, or rate of positive COVID-19 tests, is a critical metric in Pritzker's "Restore Illinois" plan, and now the northeast region is hitting its mark. Dipping just below 20% over a 14-day average is a requirement for getting to the next phase of reopening.

A week after hitting a critical testing milestone, officials said they've been able to maintain it. The state is launching four new drive-up testing sites.

All four regions of the state remain poised to move to Phase 3 of the governor's reopening plan on May 29. At that point, hair salons and barbershops can reopen with capacity limits and restrictions, as can offices, manufacturing and retailers.

"We can be more than 6 feet apart; we have more than adequate room to do each client safely," he said.