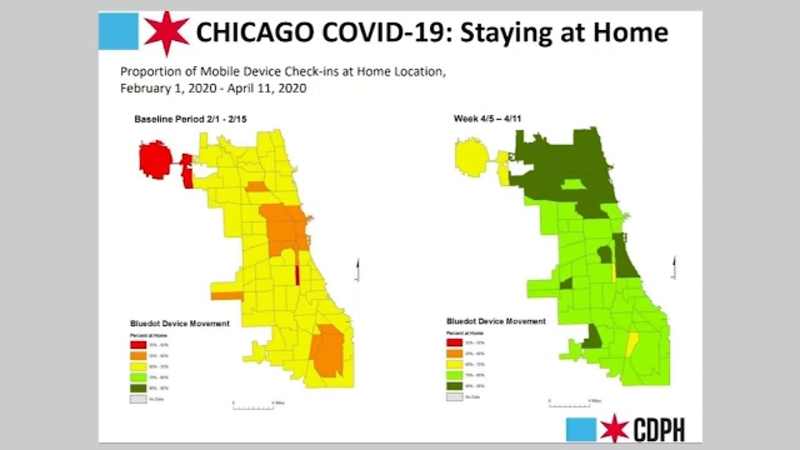 CHICAGO (WLS) -- With millions of residents stuck at home until at least April 30 under Illinois' stay-at-home order due to the COVID-19 pandemic, many people are wondering when will life get back to normal?

Gov. JB Pritzker said he wants to reopen the economy as soon as possible and when it is medically safe to do so. However, with many economies in Midwestern states intertwined, the governor and his staff need to coordinate with their neighboring counterparts on how and when to do it.

Gov. Pritzker, along with governors across the country, have been facing pressure to lift restrictions and reopen economies.

But Pritzker warned that although there are encouraging signs in the state's fight against COVID-19, Illinois hasn't reached its peak.

Pritzker said he's also particularly concerned that the rate of ascent for the virus in rural areas caught up to, and in some areas surpassed, the rate in urban areas.

The financial impact of the stay-at-home order has drastically cut sales tax revenues with so many restaurants and businesses closed, along with the loss of gambling revenue from casinos.

Pritzker added that other states are facing similar budget shortfalls, regardless of political affiliation or how fast or slow the state's leadership moved to implement social distancing measures.

"This is a public health crisis, but it's accompanied by massive economic disruption that's unprecedented in modern history," Gov. Pritzker said.

Pritzker said they all agree about the need for more testing and the ability to trace and treat the virus as important considerations for lifting stay-at-home orders.

"Folks, this curve may not flatten, and it may go up again, if we don't adhere to the stay-at-home order," he cautioned.

Despite new signs that the COVID-19 pandemic might be taking a slight turn in the right direction, both city and state leaders say there should be no rush to end the stay at home o

While Gov. Pritzker said the stay-at-home order may need "adjustments" after April 30, Chicago Mayor Lori Lightfoot said she believes the order will be extended into May.

"I think that's gonna be difficult for us to say April 30, everything comes up," Lightfoot said. "I don't expect that to happen. I think that it will still extend beyond that."

However, Mayor Lightfoot and city health officials announced Wednesday that data suggests Chicago is succeeding in "flattening the curve" in its fight to stop the spread of the coronavirus.

The data shows the city has seen a slowdown in the rate of new cases, with the number of cases doubling every twelve days currently, as opposed to doubling every two to three days one month ago.

Data from hospitals and health officials appears to show the coronavirus curve in Chicago may be flattening.

"Thanks to our citywide efforts to stay home and socially isolate, we have made important progress in flattening the curve and stemming the spread of COVID-19 in Chicago," said Mayor Lightfoot. "However, as encouraging as these numbers are, the light at the end of the tunnel is only a pinprick and we will need continued diligence and social compliance before we can bend the curve and outrun this crisis. That's why it is imperative we continue to be safe and act responsibly, as it is truly a matter of life and death."

The technology works by looking at the location of the device between the hours of midnight and 9 a.m., then pinging the device's location every half hour to see how far it moves from home, Lightfoot said.

"This data is encouraging and shows that all of our efforts appear to be having the intended impact in helping to limit the spread of this virus," said Dr. Allison Arwady, CDPH Commissioner. "But I want to be clear: this also tells us that we need to be abiding by these restrictions more now than ever, because we haven't yet gotten to the other side of the curve, where the number of daily cases begins to fall day after day. We need to get to the other side of the curve to be able to move forward as a city."

Lightfoot said the city will continue to monitor data before recommending an end to the stay-at-home restrictions.

Gov. Pritzker said he will also base his decision to lift or extend the stay-at-home order on information from health experts.

Pritzker said there is a growing consensus in hospitals and from experts that COVID-19 cases in Illinois are leveling off more than before. But he's not ready to announce any new decision on extending the stay-at-home order past April 30.

Pritzker cautioned residents that even after April 30, life will not return to normal all at once.

When asked if he would be extending Illinois' stay-at-home order, Gov. Pritzker said Thursday he expects to make a decision within the next week.