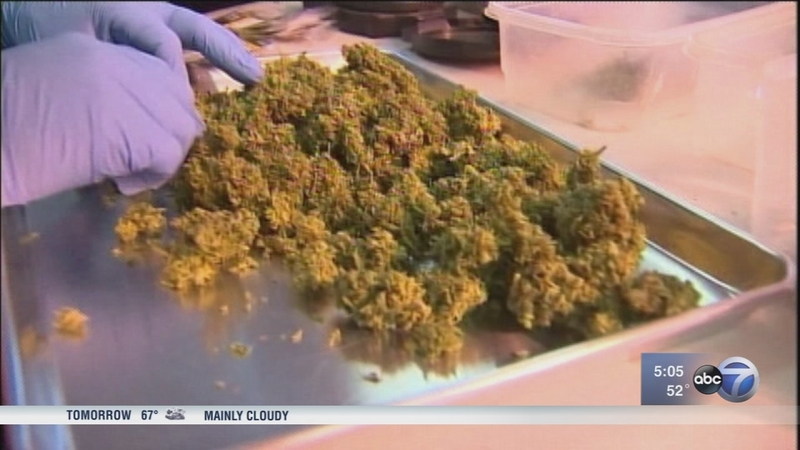 SPRINGFIELD, Ill. (WLS) -- Illinois lawmakers heard from a Colorado administrator Wednesday about the benefits and pitfalls of legalizing recreational marijuana.

Some lawmakers believe the revenue generated by legalization could help ease the state's financial crisis. Supporters say it could be a financial windfall for the state and could eliminate some of the illegal street corner sales.

Lawmakers considering the bills proposed in the Illinois General Assembly last month heard Wednesday about the impact legalized marijuana has had in the state of Colorado.

Marijuana is already legal in Illinois for the 17,000 people with licenses to buy it for medical use, but that's a tiny number compared to marijuana users in the state who are doing it illegally, the bill's sponsors say.

"Getting this out of the illegal market, taking some of those dealers off our streets, restricting access by youth, these are all really good reasons to do it, over and above the financial benefit," said State Rep. Kelly Cassidy (IL-14), co-sponsor.

And the financial benefit could be huge: according to estimates, up to $700 million dollars in tax money if marijuana was legal in the state.

Legal marijuana is heavily taxed: There's a 28% tax in Colorado and a 37% tax In Washington. In Oregon, the tax ranges between 17% and 20%, depending on the city and county. Growers, processors, retailers and buyers all pay taxes. Medical marijuana tends to be cheaper than recreational because it is taxed at a lower rate. In the past year, Colorado has received nearly $200 million in tax revenue from over $1 billion in marijuana sales.

A joint committee of House and Senate members heard how legalizing marijuana has impacted the state of Colorado where it is legal to buy small amounts for those older than 21. Brohl said there is good and bad coming out of the legalization.

"I will tell you what keeps me up at night, is that 22-year-old person who walks in and buys it legally and goes home and gives it to his or her 15-year-old sister," Brohl said.

That is one of the concerns the Illinois Association of Chiefs of Police have with the bill.

The police chiefs said potential problems an increase in impaired driving, higher health care expenses, even an increase in homelessness. Proponents say it's a long way from becoming law, but it would be carefully regulated. The bill proposes the same regulations and illegal actions as alcohol.

"We have been hearing a lot of support for this around the state," said State Senator Heather Steans, co-sponsor.

Colorado's revenue director said there is still a black market for marijuana sales in that state, but at least 75 percent of marijuana sale are now part of the legal market and thus subject to sales tax.