PUA Unemployment IL: How to report fraud to IDES as fake claims spike 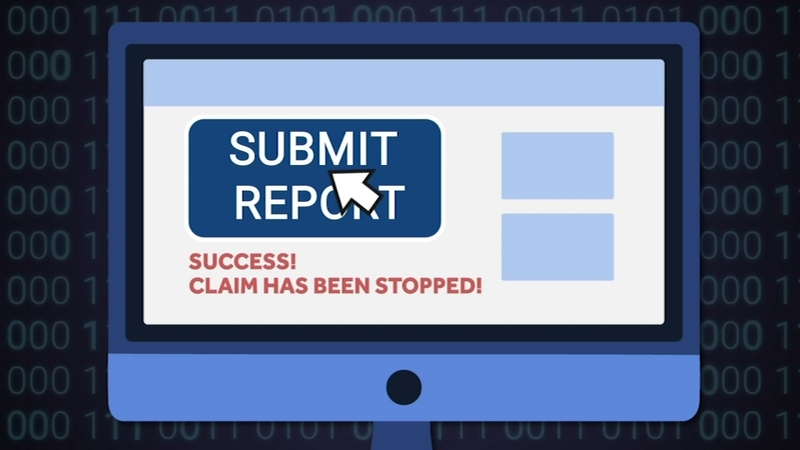 CHICAGO (WLS) -- The I-Team is getting an increase of calls from people who say fake unemployment claims are being filed in their name. One state senator and some police departments said they're getting the same spike in calls.

The Illinois Department of Employment Security and other unemployment offices around the country have been a massive target of fraudulent claims since the pandemic began. In Illinois, the state says there have been 212,000 cases since March.

LaGrange resident Kathleen Mungo was perplexed as to why her husband received an IDES debit card and a letter saying her husband was receiving $12,000 in unemployment.

So she called her husband's employer. "They said, 'No, we have not gotten any requests from IDES for unemployment benefits for your husband so nothing should not have been approved," she said. And of course he's still employed.

Gov. JB Pritzker discussed fraud in Illinois' unemployment system on Monday, specifically addressing schemes that target those left out of work by the COVID-19 pandemic.

Worried about being taxed for this income, she and her husband tried to report the fraud to IDES.

"The first day I spent about 45 minutes on the phone trying to get through to somebody because of course I'm scared. I'm a little panicky our information's out there," Mungo explained.

She says she entered the callback system "queue" more than 2 weeks ago and reported the fraud to IDES online, but she has not yet heard back from anyone at IDES, "I just find myself as a taxpayer, and a resident of Illinois, wanting to know where are people? Where's our leadership trying to resolve the problem?"

So Mungo called State Senator John Curran, who represents the 41st District. He knows firsthand how hard it is to untangle the knot caused by fraud. Someone filed for unemployment benefits in his name, too.

"You've got to call your bank, you got to call your credit card companies, you got to call the credit reporting services to put holds on it. There's a lot of work to do when you're subject to fraud. I myself was subject to a fraudulent filing, and it is a lot of work to go through, but one of those phone calls you should be making is to either your state representative or your state senators office and they can help you through the process," Curran explained.

Curran said he's hearing from many constituents who called IDES to report fraud and tries to help them get an answer if they haven't heard back within the expected two-week callback time.

"People want to talk to someone. The reporting on the website has been an improvement, like I said, the process has improved. IDES has made improvements. They've gotten the callback time down from the summer, where it was running for three weeks, we're down to two weeks," Curran said.

If you're a victim, you should file a police report. When reporting the fraud to IDES, you can go to the fraud link on the state's website.

After you report the fraud, IDES says the claim will be stopped. Save proof of the submission by printing, taking a screenshot, or a picture of your screen with your phone.

You can also call the IDES fraud number: 800-814-0513. If reporting identity theft, press 1. When you get a callback, an agent will ask you for the claimant number which was filed in your name and the last four digits of your social.

The FBI had told the I-Team to save the unemployment debit card in case it's needed for an investigation, but now its deferring to IDES, which is now saying it's best to destroy it to make sure its not used.

Acting director of IDES, Kristin Richards this week warned, ""IDES is experiencing fraud in an order of magnitude we've never seen before.as we see in the press and as I hear in other states, this I s a nationwide issue not unique to Illinois. The good news is we are working closely with state and federal partners to pursue bad actors."

"We're identifying it," Governor JB Pritzker stated earlier this month. Pritzker has repeatedly stated the fraud is not unique to Illinois and recently explained what's being done to fight it. "and we're doing it by figuring out which categories using data analysis, they're most likely the fraud and then going after we have a certain number of investigators for the state, as you can imagine, in this pandemic in this terrible economic crisis. It's never enough, you'd like to have more our budget hasn't allowed that, but we're doing everything that we can with the federal government's investigators to make sure that we're tracking down."

Mungo says she's not just thinking of her husband's case, but others in need of the assistance, "You have people that can't put food on their table pay their rent. Truly, truly deserving of IDES and aren't getting it."

Curran adds, "The scammers get it in my situation a card was actually issued it was issued to my address the house I grew up in. So somehow someone changed the address in the system for IDES."