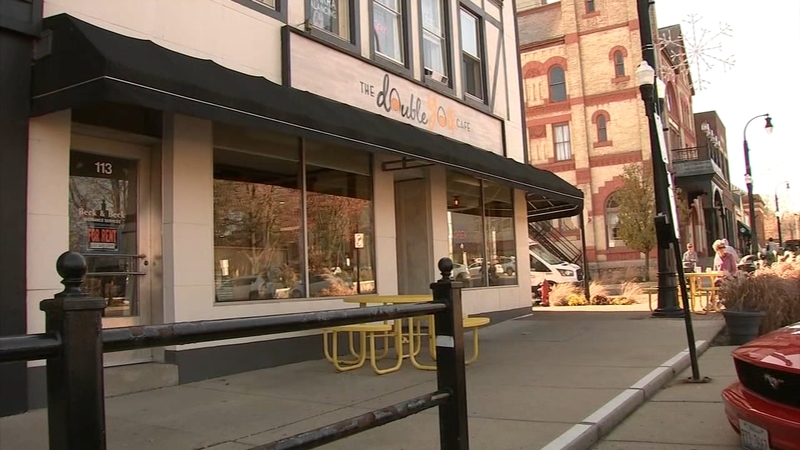 CHICAGO (WLS) -- Some restaurants in McHenry County are still offering inside dining, despite the guidelines set by the governor.

Business is slow at the Double Yolk, but they are scraping by. The restaurant on the square in Woodstock has installed Plexiglass partitions to keep customers separated and they have hand sanitizer everywhere. But they are continuing to serve customers inside in violation of the state's order to close indoor dining.

"It's a struggle, but this is how we pay our bills. If they shut us down, what do we do?" owner Thomas Teresi said.

They've got plenty of company. Around downtown Woodstock, there are plenty of bars and restaurants still open indoors. There are also plenty of outdoor customers.

At Niko's Red Mill they have closed the dining room Thursday, after getting a warning citation from the McHenry County Health Department. They are fortunate to have a large patio and other outside seating. That won't help when the temperatures drop next week.

"We don't even get a letter in the mail," owner Niko Kanakaris said. "If we don't watch the news, we wouldn't even know we had to shut down."

The McHenry County restrictions went into effect last weekend. County officials said it's too soon to tell how many restaurants are staying open indoors despite the governor's mandate.

"They're supposed to support state law. That is their job. And when they don't enforce them, people die," Gov. JB Pritzker said during his daily COVID-19 briefing Thursday, when the state reported a new record 9,935 cases in the last 24 hours.

Among the frequent customers at the Double Yolk is Woodstock City Councilman Darrin Flynn. He said the city is emphasizing education and leaving enforcement to the county and state.

"In the city of Woodstock, if there's a mandatory closure, 80% of our restaurants wouldn't reopen and we can't have that," he said.

In years past, Niko's has brought in crowds of up to 2,000 people for concerts in back. Not this year, business is way down and they're just trying to keep afloat.