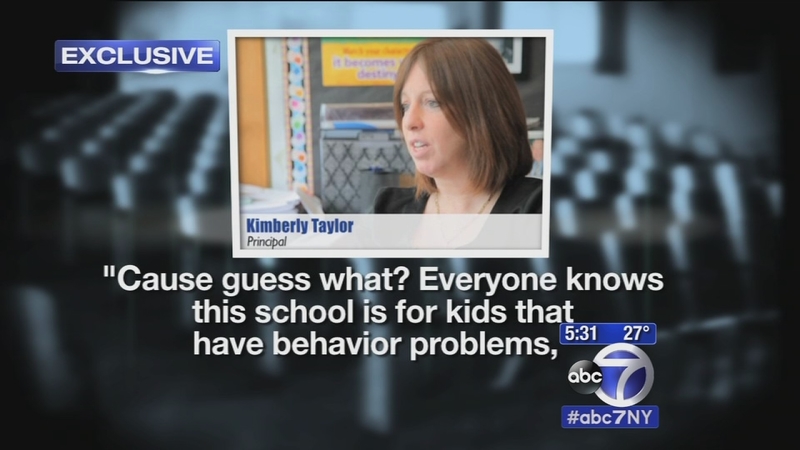 HAVERSTRAW, N.Y. -- A Rockland County, N.Y., school administrator is accused of bullying students with behavioral issues, and Eyewitness News has obtained a shocking audio recording of the principal at the Hilltop School in Haverstraw.

Warning: The audio is disturbing, in part because the targets of the principal's tirade are elementary and middle school students, most of whom have learning and behavioral problems.

Principal Kimberly Taylor is the educational leader of the Hilltop School, and Kenneth Egan used to be a teacher's aide there until he says he started complaining to the superintendent about Taylor's treatment of the the children.

Taylor cowered in her car rather than answer questions about the way she treats the K-8th graders at the school for special needs students. Their website touts a positive learning environment, and Taylor comes across as a dedicated educator.

"Students are in classes more," she says. "They're engaged more, more hands-on activity."

But the audio recording we obtained appears to capture another side of the principal, who is heard threatening and cursing at the children to behave during graduation ceremonies.

"It's important you're on your best behavior," she is heard saying. "If someone falls in dance, don't laugh because I will rip your (expletive) out of there. It's important not to embarrass yourself, your family, take pride in yourself. I will embarrass you, you all know me, if you don't give a (expletive), neither do I."

Egan says he recorded Taylor after the administration ignored his repeated complaints about what he describes as constant bullying of the children.

The worst he says he saw was when Taylor became unhinged after two students got into a scuffle during a graduation rehearsal.

"And this is what will happen tomorrow?" she screams. "Who started this (expletive)?"

Egan says she then dragged one of the two kids up to the front of the auditorium filled with special needs students.

"This is a retard," she says. "How embarrassing, a disgusting embarrassment, get him the hell out of my sight."

On another recording, Taylor rips into a student for failing to give his seat to a teacher.

Just weeks before he was to gain tenure as a teacher aide, Egan was fired. He claims it was a classic case of retribution for blowing the whistle.

"I do not (regret anything)," he said. "I do not. The only I regret is not stopping it the second it happened."

When we caught up with Taylor, she had nothing to say. We were told that we could not be on school premises by a guard who put his hand in front of our camera.

The superintendent for Hilltop School responded in a statement, saying "The situation occurred more than three years ago. It involved a personnel matter that was addressed at that time. We maintain an outstanding academic program."

Egan's lawyer says they're suing to get his client's job back and to get Taylor out.

"The fact that nothing was done, that no one disciplined this principal, that she's still on the job, and Mr. Egan, who only tried to bring this to attention of higher-ups, he gets fired for it, that's an outrage," attorney Randolph McLaughlin said.

The superintendent declined to comment on the audio recording, but Eyewitness News has confirmed that Taylor was suspended for the tirade.