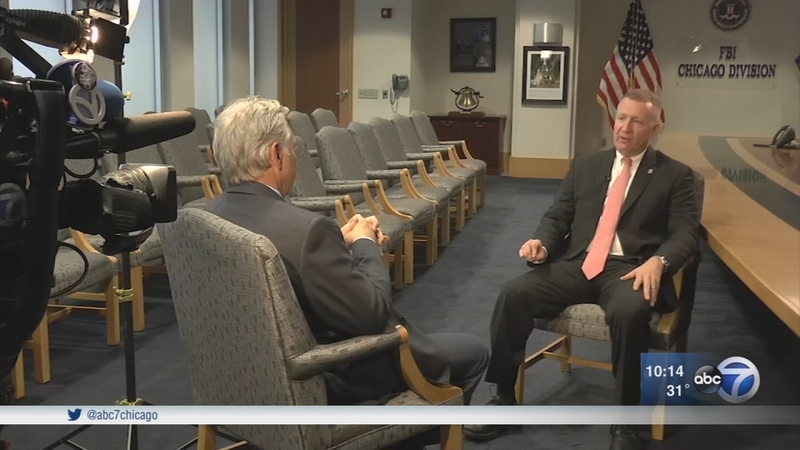 Goudie sits down with new head of FBI in Chicago

New FBI-Chicago special-agent-in-charge Jeffrey Sallet was at ground zero on 9/11 when the first tower at the World Trade Center came down.

And Sallet was running in the Boston Marathon in 2013 when two bombs went off at the finish line ahead of him.

"A mass violence event could happen anywhere, anytime" Sallet told the I-Team in his first network TV station interview since arriving in Chicago two weeks ago.

Last Saturday Sallet was at the Michigan Ave. Christmas parade and then Sunday he went to Soldier Field for the Bears game-not as a spectator-but to see how Chicago protects itself and how the FBI can help shore things up.

"Chicago is the third largest city in America. It has a very diverse population and it has targets which would be attractive to terrorists" he said. "When we forget and we do not think that something can happen is when bad things do happen."

Sallet, 47, takes a sober view of the city's track record. "The fact that we have not had a terrorist attack or a mass violence incident can be attributed to the exceptional work of the Chicago police department, local state and federal authorities, and the public working together to detect deter and prevent these attacks."

Nobody at the Chicago field office has had to school Jeff Sallet that Chicago is a jihadist target...and was one on 9/11.

"I was at the corner of Church and Vessey street (in New York City) when the south tower fell" he recalls.

Sallet was assigned to the FBI-New York office on that terrible day. "I'm one of those folks that you see running away from the falling dust cloud."

Chuck Goudie and the ABC7 I-Team met with Jeffrey Sallet, the new special-agent-in-charge of the FBI in Chicago.

Perhaps that foreshadowed his running of the Boston marathon in 2013. When two bombs exploded ahead of him, near the finish line, his wife and children saw the blasts.

"It took me two hours to find my family" Sallet said. "You cannot harden 26.2 miles to make sure that it is absolutely a hard target. What we can do is we can make sure we have the detection in advance, that we're looking for all the threats, that we're using intelligence to make sure we're on top of it."

When the bomb attack interrupted Boston's marathon, Sallet was quickly transformed from runner back to special agent supervisor-and he led the marathon investigation for weeks.

Both events-Boston and 9/11-along with his leadership stints in Providence, Washington, DC and most recently New Orleans-give Sallet a unique view of his new post in Chicago and his agency.

"We can always be incrementally better. We need to evolve. We live in a time where the threats have evolved so rapidly" he said. "Crime is without borders, people have incredible technologies when it comes to social media and camera phones and all the stuff that is happening, we need to be more nimble and we need to better."

But Sallet is quick to add: "that doesn't mean we're not good. It doesn't mean people aren't doing a good job. When I come into a location my job is to ask the questions, how can we be better and how myself as a leader-I can support my people to be better?"

"The fact that Lollapalooza was a potential target-the answer is anything in Chicago could be a potential target-I would argue without getting specific that the current apparatus of the Chicago police department deterred the Las Vegas shooter from coming here."

Paddock didn't show up for his reservation at The Blackstone Hotel overlooking Grant Park.

Instead, last month in Las Vegas, he opened fire from a makeshift sniper's perch in the Mandalay Bay hotel. Paddock eventually shot and killed himself, but not before he had shot hundreds of people.

Sallet pointed to the lesson for law enforcement. "The terms that I use in this are detect, meaning identify before it happens; deter it or prevent it; and then the other part is being able to respond and investigate."