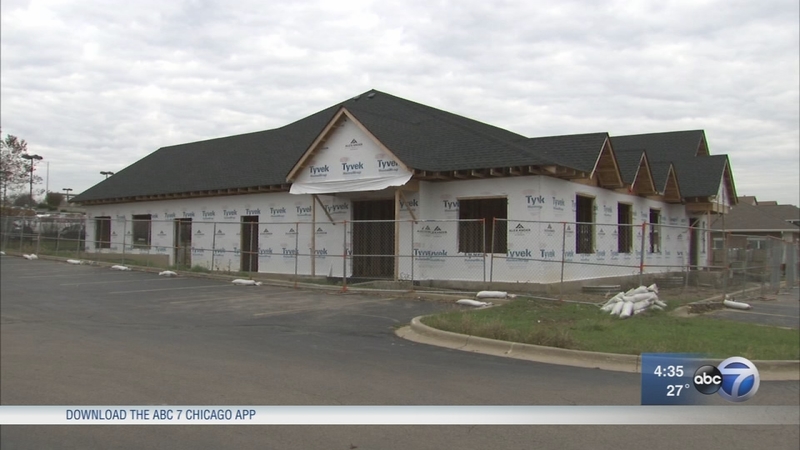 ST. CHARLES, Ill. (WLS) -- Good intentions were interrupted in the western suburbs as plans to build a treatment center for children with autism have been put on hold.

Over the summer, dignitaries in St. Charles posed for photos with Jenny McCarthy in front of what was to be a place to help kids with autism. The project should have been near completion, according to the general contractor.

Instead, the project is in limbo as the contractor alleges he hasn't been paid.
The general contractor for this building project says the offices of Generation Rescue were supposed to open this month, but work on the project has stopped.

"I want to see the building done. I'm very proud of what I do, I've been in business 30 years," said Vince Fiore, JV Construction.

Fiore said the building was to be used by Generation Rescue for treating children with autism on one side, and on the other side, cosmetic surgery.

"The total building is 5,300 square feet," he said. "It has a full basement and accommodations for a full elevator."

Patel filed a motion to dismiss the lawsuit alleging that if anyone was responsible, it was the L.L.C. and not the individuals.

McCarthy has long been an advocate for children with autism. She was in St. Charles over the summer with her husband Donnie Wahlberg for fundraising concert and the groundbreaking of the center. Candace McDonald said the money raised was to offer grants to families to treat children with autism.

McDonald, the executive director of Generation Rescue, said while they had planned to refer families to the St. Charles center, the non-profit was not involved in the building project.

McDonald responded on behalf of McCarthy saying in part: "Generation Rescue raises money to support our programs that include medical treatment grants, patient education programs, parent mentoring and a national conference....
We do not build or operate clinics, nor did we sign any contracts obligating Generation Rescue to any construction or land costs....

It is our sincere hope that the two parties involved in the construction payment dispute can work things out to get the building finished and then open the clinic to serve local families."

As the dispute over payment plays out in court, the building is not ready for use.

"Terrible. Losing sleep. Bad for me personally, my family. A lot of money at stake," Fiore said.

McDonald confirmed Samir Patel is a board member of Generation Rescue who has built two other clinics for autism families. The attorney for Patel said neither he nor his client will comment.