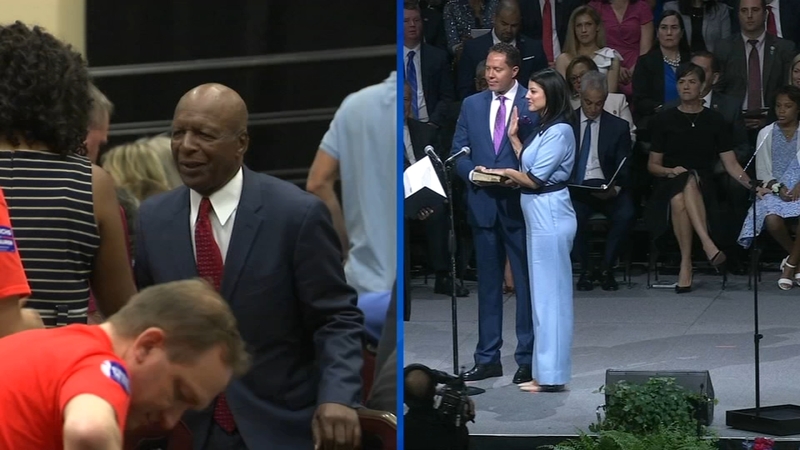 After more than 23 years, White is the longest-serving secretary of state in Illinois history. He's retiring at the end of what will be his 6th term in office.

Anna Valencia is the current City Clerk of Chicago. White issued a statement saying she will be an "excellent" secretary of state and a "champion for road safety."

Full Jesse White statement:
"It is an honor and a privilege to serve as Illinois Secretary of State and I thank the people of Illinois for entrusting me with the opportunity to serve them for an unprecedented six terms. I am proud of what we have accomplished during the past 23-plus years. Through our efforts, we have made Illinois roads safer, improved customer service and cleaned up an office that had been under a cloud of controversy and corruption prior to my tenure.

"Since announcing I would not seek another term, I have been frequently asked who I would support as the next Secretary of State. It was important to me that such a person would be committed to good government and public service, that they would take on the job and the responsibility that goes with it, and that they would have the credentials and character that the people of Illinois richly deserve representing them in such an important office.

"The Democratic Party is fortunate to have three strong candidates running for this office. However, I believe, one candidate stands out above the rest.

"That's why I am proud to announce my endorsement of Anna Valencia for Secretary of State.

"I have known Anna for many years. I am impressed by her energy, commitment to public service and her dedication to getting the job done. As Chicago City Clerk, she has successfully modernized the office and made day-to-day customer service a number one priority. She has the ability and understanding to deliver important services to the public in a consistent, organized and effective manner.

"Anna's personal history gives her a unique ability to relate to Illinoisans of all backgrounds and regions. She grew up in a strong family with a commitment to the Labor movement and they continue to share the values of helping working men and women and improving society for all.

"Like me, she comes from the Metro East region - a downstate area across the Mississippi River from St. Louis. Anna currently makes her home in Chicago.

"Anna is an excellent fit as Secretary of State. She will be a champion of road safety, working to build on our record of saving teen lives and combating drunk driving. She will be a strong advocate for good government and enhanced customer service-keeping up with rapidly changing needs and technologies.

"And as it was in 1998, this year's election for Secretary of State will also be historic.

"I believe in my heart that Anna Valencia will be an outstanding Secretary of State and I am deeply proud to offer her my unwavering endorsement."

Statement from City Clerk Valencia:
"I am humbled and honored that Secretary White has endorsed me to carry on his legacy for the people of Illinois. He made history as our first Black Secretary of State, and I look forward to earning the votes of Illinoisans to make history as the first woman and first woman of color to hold the office. Secretary White is admired, respected and beloved in every corner of Illinois because he consistently shows up and delivers for all communities. I plan to build on his legacy by bringing my experience to the Secretary of State's office to keep making government more accessible, innovative and open. I am grateful that Secretary White is putting his faith in me, and I will never stop fighting for working class families, women, communities of color and immigrants who need a champion in their elected leaders. I am ready to carry on the torch that Secretary White is passing on to me."

Giannoulias campaign spokesperson Hanah Jubeh issued a statement saying, "We're proud of the more than 200 endorsements Alexi's campaign has received from elected officials, Democratic groups and organized labor - including SEIU, which has more than 2,500 employees in the Secretary of State's office, the Cook County Democratic Party and Southern Illinois Democratic County Chairs' Association. Alexi's broad-based, grassroots organization is a clear signal that his message of modernizing the office to reduce long lines and wait times, protect voter rights and increase opportunities to register and to reimagine libraries to increase access and equity is resonating with Illinois voters."

Alderman Moore issued a statement saying, "While I am disappointed that Illinois Secretary of State Jesse White chose to endorse one of my opponents in the race to replace him, it is not a surprise. Secretary White has a long history with Senator Dick Durbin and his pick comes out of the organizations of both elected officials.

"Again, I am the only candidate in the race who helped circulate petitions for White in his first run for secretary of state in 1997. I believed he was the best person to change the perception of the office from a political steppingstone marred in scandal and corruption to one of customer service and integrity.

"I will continue to travel the state to touch as many Illinoisans as possible to share my vision for how to build on the foundation White has put in place during his tenure and how to modernize and improve the secretary of state's office for the future."
Report a correction or typo
Related topics:
politicsillinoiselection
Copyright © 2022 WLS-TV. All Rights Reserved.
TOP STORIES
Evanston senior denied graduation walk for Native regalia on cap
More collar counties charging dealers for drug overdose deaths
NFL QB Dwayne Haskins legally drunk when he was hit, autopsy shows
Family of woman who died during heat wave in N. Side apartments sues
Horse 'close to death' after 8-mile Dan Ryan ride now recovering
Man loses both legs after Michigan Ave. hit-and-run
Chicago Weather: Sunny, cooler by the lake Tuesday
Show More
Woman found screaming in abandoned Far South Side house, neighbor says
Feds recorded Madigan learning about secret payments, records show
New book shares wisdom from late Chicagoan and comedian Bernie Mac
MLB suspends slugger for 'Jackie' remark toward White Sox's Anderson
Stocks surge thanks to big rally for JPMorgan Chase and other banks
More TOP STORIES News