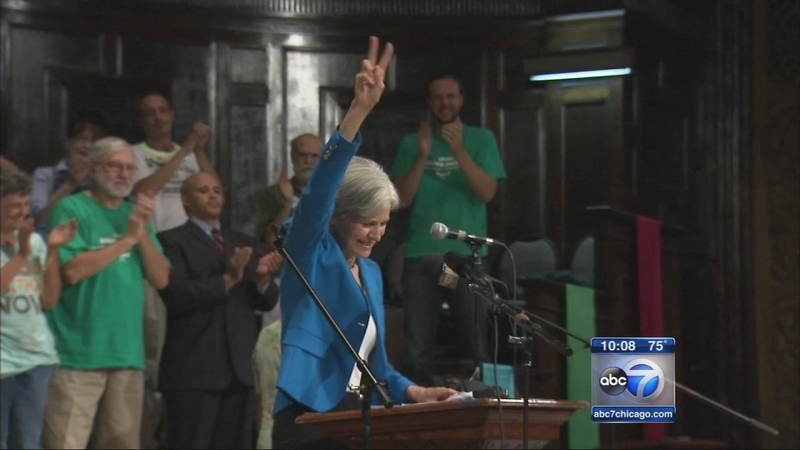 CHICAGO (WLS) -- Green Party presidential candidate Jill Stein visited several places in the Chicago area Thursday, even as a warrant has been issued for her arrest.

Stein, 66, grew up in north suburban Highland Park, graduated from Harvard Medical School and turned to activists when, as a doctor, she became concerned about how the environment affected people's health.

As Green Party candidate for president, she is hoping to capitalize on Donald Trump and Hillary Clinton's unpopularity. At an evening rally, she was optimistic her poll numbers could rise.

"We live in a democracy and we have more than two choices that are funding predatory banks," Stein said.

Stein walked a few blocks in the Austin community earlier in the day, ending her tour at one of Chicago's 50 closed schools. Bringing attention to a neighborhood plagued with poverty and violence earned her a few votes along the way from residents who were surprised to see a presidential candidate.

"I think it's great because we haven't had nobody come by here in this community," said resident Rebecca Willett.

But Stein won't be there for long; a warrant is out her arrest.

Stein tweeted a photo Wednesday that shows her spray-painting a bulldozer at an oil pipeline protest in North Dakota.

"Our lawyers are working with legal authorities in North Dakota. We will participate respectfully with dignity in the legal system," Stein said.

Court records show Stein was charged Wednesday in Morton County with misdemeanor counts of criminal trespass and criminal mischief. The same charges have been filed against her running mate, Ajamu Baraka.

Activists invited Stein to leave a message at the protest site near the Standing Rock Sioux Tribe's reservation on Tuesday, Figueroa said, and Stein sprayed "I approve this message" in red paint on the blade of a bulldozer. A court document shows Baraka painted the word "decolonization" on a piece of construction equipment.

Morton County Sheriff's Office spokesman Rob Keller said the warrant has been filed and if authorities were to come across Stein, "they would arrest her."

The Standing Rock Sioux Tribe is trying to stop construction of a section of the $3.8 billion, four-state, Dakota Access pipeline that tribal leaders say would violate sacred and culturally sensitive grounds and possibly pollute water.

While Stein tries to get noticed in the presidential race the other third party candidate, Libertarian Gary Johnson, earned some unwanted attention Thursday with a major gaffe when asked about the Syrian city of Aleppo, which is the center of the refugee crisis in the ongoing Syrian civil war. When asked for his opinion on Aleppo, Johnson did not know what it was.

Later on ABC's The View, Johnson tried to explain his stumble.

"There is no excuse. I was thinking it was an acronym," Johnson said.

While Johnson tries to move on from his gaffe, Stein is pushing for the third party candidates to participate in the presidential debates. Candidates must poll at 15 percent in five national surveys to get on the debate stage. Stein and Johnson are not close.