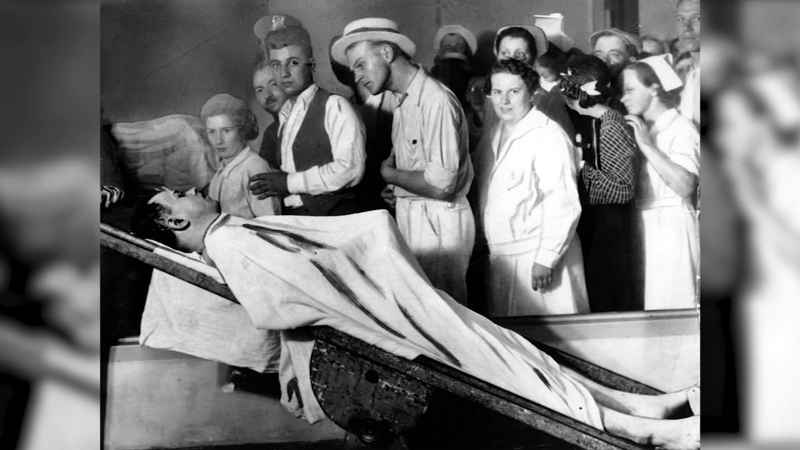 CHICAGO (WLS) -- Relatives of Depression-era desperado John Dillinger claim they have evidence that the man shot and killed in Chicago 85 years ago may not have been the notorious fugitive, the ABC7 I-Team has learned.

According to newly-filed affidavits from a man and woman who say they are Dillinger's nephew and niece, "I have been presented with evidence that demonstrates that the individual who was shot and killed at the Biograph Theatre in Chicago on July 22, 1934 may not in fact have been my uncle, John H. Dillinger."

The affidavits, obtained Wednesday by the I-Team, are signed by Mike Thompson and Carol Thompson Griffith.

In a statement to the I-Team late Wednesday the FBI in Chicago disputed that someone other than John Dillinger was shot and killed by agents in the incident.

"On July 22, 1934, FBI Agents shot and killed John Dillinger at the Biograph Theater in Chicago as he reached for a pistol from his trouser pocket," an FBI spokesperson said. "Dillinger - who was wanted for multiple violent crimes - was pronounced dead at the Alexian Brothers Hospital, bringing about an end to the Gangster Era."

On Tuesday, several Indianapolis news organizations reported that Dillinger relatives had filed paperwork to have his body exhumed from a concrete-encased grave there, but that there was no reason given for the request.

The affidavits state that new evidence "includes the non-match of his eye color, the ear shape and protrusion from the head, the fingerprints not matching, the existence of a heart condition, and the apparent non-match of the anterior teeth."

Questions about the Dillinger corpse have dogged the investigation for decades. As the I-Team reported in 2009, a Cook County Coroner report lists Dillinger's eye color as "brown," even though he was known to have blue eyes.

After the long-lost report was found stashed in a corner of the old county morgue in 1984, former Cook County Medical Examiner Robert Stein explained that such a disparity "doesn't mean a darn thing."
Stein said after death "there can be some clouding of the cornea, and you (could) have difficulty telling the color of the iris."

The coroner's report does indicate heart issues and some post-mortem photos do reveal protruding ears, although Dillinger had been shot in the face, among other places.

As for allegations of non-matching fingerprints, according to FBI reports from 1934 there was a fingerprint match between the body and Dillinger.

The exhumation, aimed at "possibly removing a bone or bones for DNA testing" according to the permit paperwork, could answer once and for all whether the dead man is indeed Dillinger. However, a widely-publicized date of September 16 as the day the grave is to be cracked open is not a certainty.

A spokesman for The History Channel, that will be on hand to film an exhumation if it happens, tells the I-Team they are still waiting for additional approvals from authorities in Indiana.

Messages left by the I-Team for Dillinger family members on Wednesday were not answered.