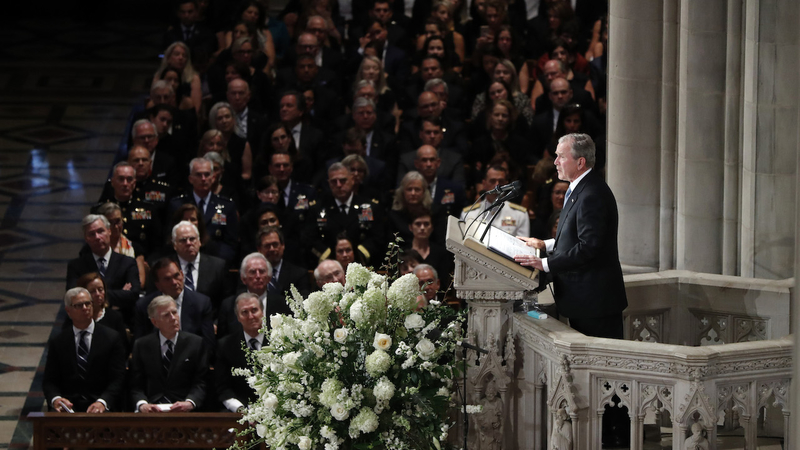 WASHINGTON -- At John McCain's funeral in Washington, his former political rivals-turned-presidents George W. Bush and Barack Obama eulogized the six-term Arizona senator, lauding him for his decades of service to his country.

Bush hailed John McCain's "combination of courage and decency" in a eulogy that touched on the state of the nation's politics under President Donald Trump.

Bush, who defeated McCain in the 2000 Republican primary, said McCain "detested the abuse of power." Bush said the Arizona senator's absence is tangible, "like the silence after a mighty roar." Noting McCain's time as a prisoner of war, Bush added that McCain "loved freedom with the passion of a man who knew its absence."

Obama spoke after Bush, remembering McCain "an extraordinary man, a warrior, a statesman, a patriot who embodied so much that is best in America."

"He made us better presidents," Obama said of McCain. The former president noted McCain was a conservative lawmaker but said he understood "that some principles transcend politics, that some values transcend party."

Obama praised McCain for opposing "bending the truth to suit political expediency or party orthodoxy" and as a proponent of a "free and independent press."

"What better way to get the last laugh than make George and I say nice things about him to a national audience?" he quipped.

Former Sen. Joe Lieberman and Meghan McCain gave two additional eulogies. Lieberman, who held office as a Democrat and an independent, described his experience working across the aisle with McCain, and Meghan McCain called her father's death the passing of "American greatness."

Former President Bill Clinton was in attendance, though he did not speak. Michelle Obama, Laura Bush, Hillary Clinton, Dick Cheney and Al Gore were also among the Washington heavyweights in the front row.