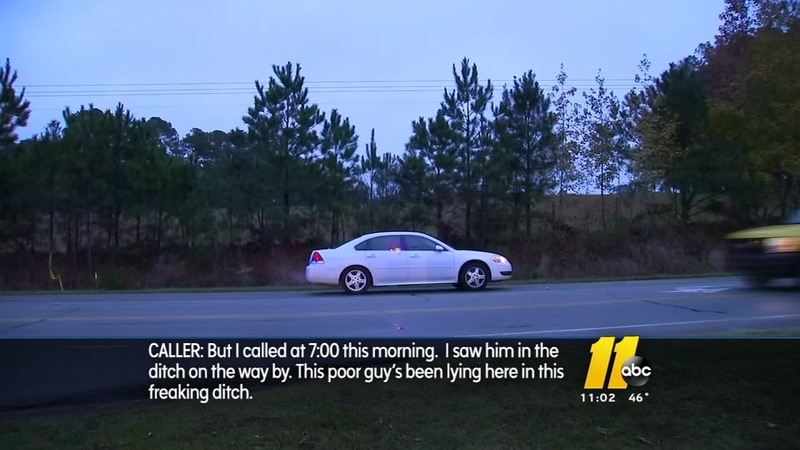 WAKE COUNTY, North Carolina -- Newly released 911 calls from the day 34-year-old Kevin Thomas was found dead in a ditch near Garner are adding more questions to the unsolved death investigation.

QUESTIONS ABOUT THE TIMELINE

November 8, 7 a.m.: A man driving by in his car on Old Stage Road near the Green Spring Valley mobile home park dials 911.

Caller: "There's a pedestrian in the ditch."

The caller says he thinks the man, later identified as Thomas, may be drunk. He says he's dirty and his pants are down around his ankles.

Caller: "He's in a supine position and appears to be partially clothed. "I'm already passed him and I didn't even realize what I'd seen until I was gone."

Caller: "But I called at 7 this morning. I saw him in the ditch on the way by. This poor guy's been lying here in this freaking ditch."

Caller: "He might not have made it. I think he's dead."

Fire, EMS and Wake Sheriff's deputies responded soon after. Thomas was indeed dead by then.

Friends say he was the father of two young daughters.

The anonymous man who called 911 may have been the last person to see Thomas alive.

911 caller told Wake County that Kevin Thomas was lying in a ditch...
5 hours later, the same caller tells 911, Thomas is STILL there and no longer alive.
New at 11: The 911 calls and the Wake Sheriff’s Office explanation. #abc11 pic.twitter.com/M7VBZltdh7

WHY DID IT TAKE SO LONG?

A Wake County sheriff's office spokesperson said deputies, firefighters and paramedics responded within minutes of the 7 a.m. call but were not able to find the body, which may have been too hidden by the brush.