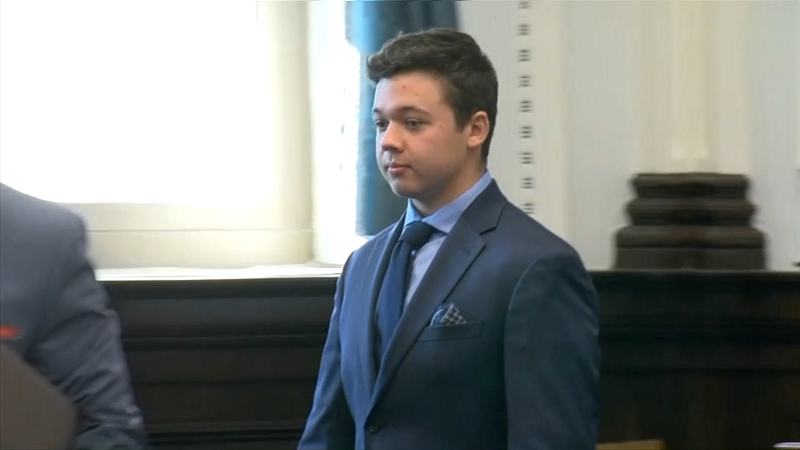 EMBED <>More Videos
KENOSHA, Wis (WLS) -- Kyle Rittenhouse, the Antioch teenager charged with two counts of murder for deadly shootings during a Kenosha protest over the police shooting of Jacob Blake, has bonded out of Kenosha County Jail.

The Kenosha County Sheriff's Office confirmed $2 million bond was posted at about 2 p.m., and set up through Rittenhouse's attorney, and that the 17-year-old is no longer in the custody of the Kenosha County Jail.

Rittenhouse is charged with first-degree intentional homicide, attempted homicide, reckless homicide, recklessly endangering safety and illegal possession of a firearm. Wisconsin law doesn't permit minors to carry or possess a gun unless they're hunting. He is due back in court on Dec. 3 for a preliminary hearing.

Rittenhouse is accused of fatally shooting Joseph Rosenbaum and Anthony Huber and wounding Gaige Grosskreutz during a demonstration Aug. 25. His attorneys say Rittenhouse was acting in self-defense.

Investigators said Rittenhouse was armed with a Smith and Wesson AR-15 style rifle with a 30-round magazine. According to authorities, the video shows Rittenhouse casually walking away from the killings, past police.

Rittenhouse was reportedly the only person to shoot anyone during the protests.

His case has taken on political overtones. Supporters of the Black Lives Matter movement have painted Rittenhouse as a trigger-happy white supremacist. Conservatives upset over property destruction during recent protests have portrayed him as a patriot exercising his right to bear arms during unrest. A legal defense fund for him has attracted millions of dollars in donations, and his mother got a standing ovation from women at a Waukesha County GOP function in September.

Huber's father, John Huber, asked Kenosha County Circuit Court Commissioner Loren Keating during a hearing Nov. 2 to set Rittenhouse's bail between $4 million and $10 million. Huber said Rittenhouse thinks he's above the law and noted the effort to raise money on his behalf. He also suggested militia groups would hide him from police if he were released.

Keating ultimately set bail at $2 million, saying Rittenhouse was a flight risk given the seriousness of the charges against him.

Rittenhouse spoke to The Washington Post by phone from a juvenile detention facility on the condition that the newspaper not ask about the shooting or events immediately preceding it.

"I got my $1,200 from the coronavirus Illinois unemployment because I was on furlough from YMCA," he told the Post. "And I got my first unemployment check so I was like, 'Oh, I'll use this to buy it.'"

He told the newspaper that he was carrying the gun that night to protect himself.

"God forbid somebody brought a gun to me and decided to shoot me," Rittenhouse told the Post. "Like, I like, wanted to be protected, which I ended up having to protect myself."

The Post asked Rittenhouse how he felt about having a gun that night.

Rittenhouse was 17 and couldn't legally buy the gun, so his friend, Dominick Black, bought it for him. The weapon was stored at Black's stepfather's house in Kenosha, Wisconsin, until Black and Rittenhouse each took rifles downtown on Aug. 25, according to police records.

"He spent his money but I told him it was going in my name," Black said in a new interview released by Antioch police recorded after the shootings.

Prosecutors say Black legally bought the gun in Wisconsin, but faces charges because the gun was used in an alleged crime.