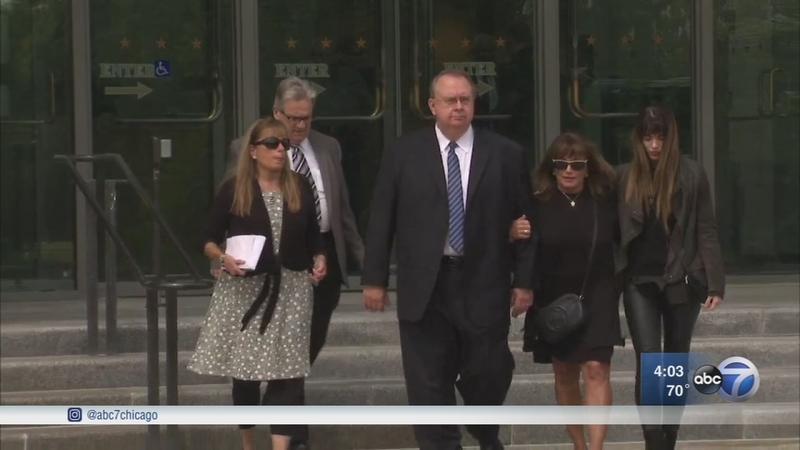 LAKE COUNTY, Ind. (WLS) -- A former Lake County, Ind. sheriff, who was accused of corruption, was convicted Thursday morning on all six counts.

After 13 days of testimony, the case went to the jury Wednesday. They deliberated for about four hours Wednesday night and one hour Thursday morning. Lake County Indiana Sheriff John Bunchich will be out on bond until his sentencing, which is scheduled for early December. In accordance with state law, Buncich has been removed from office because he has been convicted of a felony.

During the trial, federal prosecutors argued Buncich used his office's control over the towing program to get kickbacks and bribes from tow operators, usually in the form of campaign contributions or fundraising tickets. The prosecution also presented FBI surveillance video that they said showed Buncich accepting a bribe.

Buncich denied ever requiring towing companies to pay him in order to get business from his agency. He also accused the FBI and government informants of setting him up.

He blamed sloppy bookkeeping for $7,500 he received from a towing company operator not showing up in his political campaign account.

Buncich's attorney said that the conviction will be appealed.

President of the Lake County Board of Commissioners Michael Repay said in a written statement that the Lake County Chief of Police Matt Eaton will ensure that sheriff's office services are not impacted. Eaton has been appointed to serve as sheriff until the county finds a replacement to finish Buncich's term, which ends Jan. 20, 2019. The county has 30 days to fill the vacancy.

"Chief Eaton will have the complete support of Board of Commissioners and maintain control over the Sheriff's Department for the safety and concerns of the citizens of Lake County," Repay wrote.

Buncich was indicted in November 2016 alongside his second-in-command Timothy Downs and William Szarmach, owner of the Lake Station, Ind., business CSA Towing. Buncich was charged with violation of the federal bribery statute and five counts of honest services wire fraud.