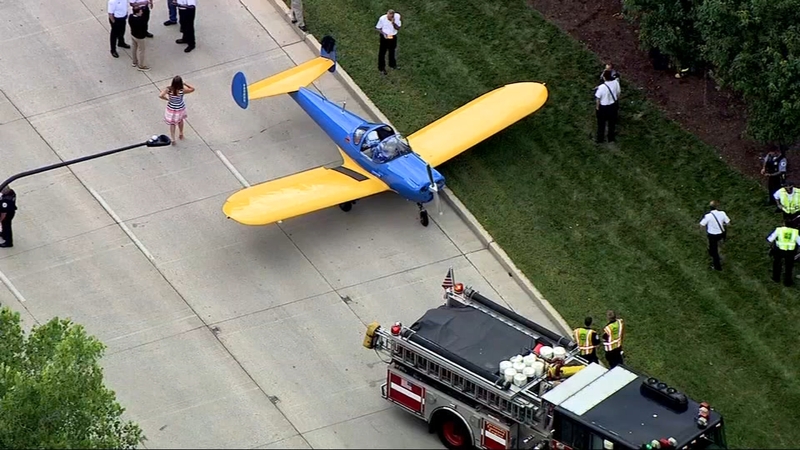 Chicago Fire Department spokesman Larry Langford said the pilot of the single-engine plane contacted authorities to report that he was having an engine issue and was quickly losing power, and asked to take the aircraft down. Air traffic controllers at Midway International Airport told him to set the plane down on Lake Shore Drive.

"If you've gotta land some place, Lake Shore Drive is better than on the street," Langford said.

The plane, a 1946 Ercoupe 415-D, was traveling from Kenosha, Wisconsin, to Cleveland, aviation officials said. Chicago Deputy Fire Commissioner Bill Vogt said the plane flew under the 35th Street footbridge as it landed.

Asked how the pilot was able to land in active traffic without sustaining damage, hitting a car, or causing an accident, Vogt simply answered, "Carefully."

There was no damage to the aircraft and no injuries reported. Both people on the plane refused medical treatment. Police said they found no criminal intent and do not anticipate any criminal charges.

No traffic accidents were reported as a result of the emergency landing.

"If the (worst) thing we have to say about today is that we held up traffic, it's a wonderful day," said 4th Ward Alderman Sophia King.

First responders maneuvered the plane on the road and then used a paramedic's stretcher board to push it off the street and into the grass. Police are on scene directing southbound traffic, which has been getting by in one lane.

The plane's wings were removed and it was loaded onto a flatbed truck and driven to Executive Airport in Wheeling.

Carla Black was driving north on Lake Shore Drive as the plane landed.

Carla Black was driving northbound on Lake Shore Drive when a small plane landed in the southbound lanes. She describes what she saw.

"All of a sudden I see this yellow plane kind of heading down, going southbound," Black said. "I could tell that it kept on going lower and lower, and it looked like it was going to crash or it was going to make an emergency landing, and what happened was you could tell that it was losing power and control because it was struggling, and it was sort of swaying between north- and southbound lanes.

With her daughter in the car, Black said she sped up to avoid the plane.

"My daughter said 'Mom, why are you going so fast?' and I said, 'That plane is about to land and hit us.' Because you could see it, it was so low we could see it in our rearview mirror," she said.

Black was relieved to hear no one was injured, in the plane or on the ground.

"I just said, 'Oh gosh, God bless whoever was in that accident because it doesn't look good,' so I'm very happy to know there was a positive outcome for everyone," Black said.

The owner of the plane that landed on Lake Shore Drive Friday praised the pilot for his actions.

This is not the first time a plane has landed on Lake Shore Drive.