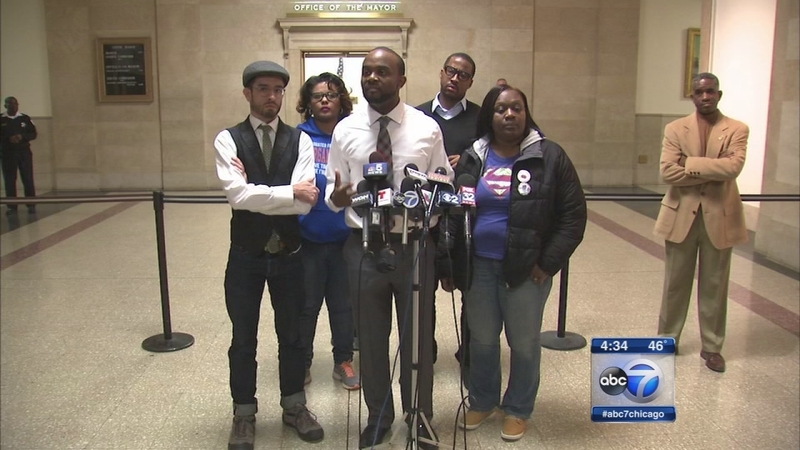 CHICAGO (WLS) -- The people largely responsible for the release of the Laquan McDonald police shooting video spoke publicly on Wednesday.

If not for the efforts of activist William Calloway and journalist Brandon Smith, video of Chicago Police Officer Jason Van Dyke firing 16 fatal shots at Laquan McDonald might still be in the hands of investigators and attorneys, not the public.

They had heard reports that the video showed graphically that Van Dyke was unprovoked before unloading his gun into the 17-year-old suspect who was walking away.

After fighting for months to force the city to release the video, they say it's even more important than they imagined that their efforts succeeded.

"We feel that solidarity that what was shown on that tape was absolutely despicable. We feel that the Chicago Police Department as a whole needs a culture change," said William Calloway, Christianaire.

Calloway enlisted the help of freelance journalist Smith in seeking release of the video based on the Freedom of Information Act.

The pair wanted to shed light on what they say is a culture inside the Chicago Police Department that allows officers to shoot civilians without repercussion. Smith says he was struck by how matter of fact it seemed like the officers acted in the aftermath of the shooting.

"Seemed like the protecting needed to be done from the officers, and not from someone else," Smith said.

The mother of Ronald Johnson, another alleged victim of a police shooting, says her son's death was also caught on video that has yet to be released.

"Cops are trigger happy. They shoot and kill. It's like, if you run from them, they figure they go the right to kill," said Dorothy Holmes, mother.

The president of the police board, which hears police misconduct cases, says the system to remove bad cops is working.

"I think the pieces that we do control, work together and work well. We don't know about the charges related to this incident if IPRA hadn't done its job, but the truth is, it did," said Lori Lightfoot, president, Chicago Police Board.

Lightfoot says she is unable to comment on the video or on Officer Van Dyke's conduct because she will likely hear the case eventually. As far as the length of time it took to file charges, she says the city turned the case over to the states attorney's office in a timely manner.