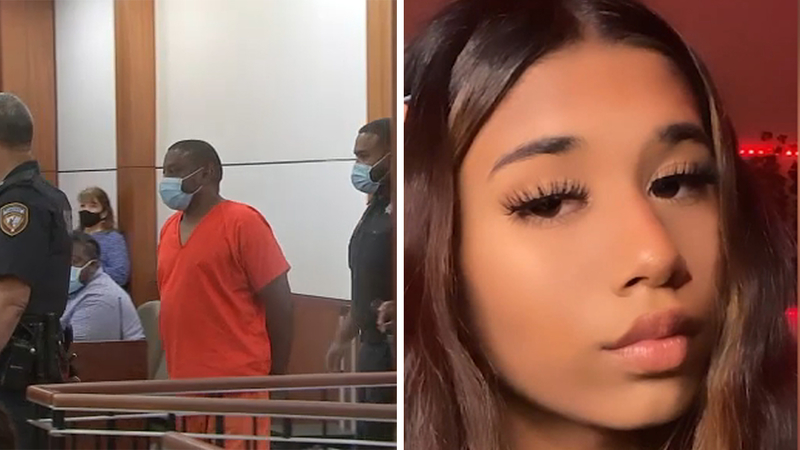 HUMBLE, Texas -- In his first court appearance on Monday morning, a judge doubled the bond for a man accused of shooting and killing his now-ex-girlfriend's 16-year-old daughter.

Brisbon did not appear in probable cause court over the weekend. A judge set his bond at $1 million. However, after new details were revealed in court on Monday, a judge raised his bond to $2 million.

Brisbon's charge could be upgraded to capital murder because of the details investigators found at the scene.

In addition to an autopsy, investigators have requested a sexual assault test be performed on the victim because evidence found at the scene indicates that she may have been raped before she was shot and killed.

The judge asked for the test results to be expedited so they can figure out if the charges need to be upgraded.

The suspect's niece spoke to our sister station KTRK after the hearing and said she was devastated over what happened to Juma, and also shocked by what her uncle is accused of doing.

"I love my uncle to death, I swear I do, but I will never be able to understand how he did something like this to Lauren," his niece said through tears.

Brisbon has decades-old previous criminal charges from the Phoenix and Chicago areas.

Deputies said the shooting happened just after 1 a.m. on Friday.

According to the teen's mother, who was at work when the shooting happened, Juma FaceTimed her and her older sister, saying Brisbon was acting "weird."

The teen was home alone with Brisbon at the time, Harris County sheriff's deputies said.

Her older sister went to the home to pick her up, but said Brisbon was holding her sister against her will inside the house.

According to court records, Juma told her mom, Laurie Young, in her FaceTime call that Brisbon was standing inside her room in the dark and wanted her mother to tell him to get out, which she did. Juma then screamed, "Mom, he has a gun," court records say. Then, the call was ended.

Deputies also arrived at the scene, and that's when gunshots were heard from inside the home.

After Juma was killed, Brisbon came outside and was arrested.

Juma was a student at Nimitz High School and had just joined the cheerleading team, her family said.

She wanted to follow in her sister's footsteps and join the military.

Her sister remembered Juma as someone who brought joy to the family.

"She was really beautiful and had a beautiful soul and just wanted to go out and enjoy life all the time," said Keryca Harmon, Juma's 19-year-old sister. "That's all she ever wanted."

Juma's family set up a GoFundMe to help with the funeral expenses.