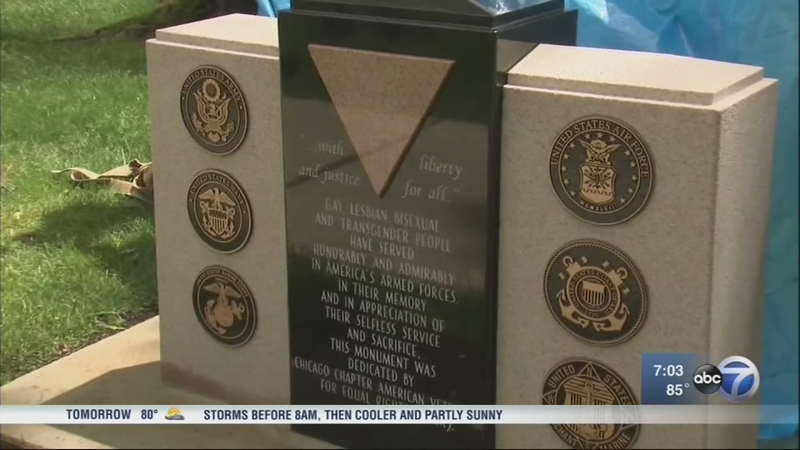 ELWOOD, Ill. (WLS) -- Police are investigating after a monument that honors lesbian, gay, bisexual and transgender veterans in Abraham Lincoln National Cemetery in Elwood, Ill., near Joliet, was defaced.

Most of the damage has been cleaned off the monument in Elwood, but the impact is still rippling through the community. The act was extra painful because it occurred during Pride Month.

The vandal or vandals used roofing tar to black out parts of the text on the monument: "Gay, Lesbian, Bisexual and Transgender People have served" and "Equal Rights." The vandalism was discovered Friday, June 16.

"My reaction, it was horrible. Who would do that? Who would take the time to deface a monument on such a sacred ground. It's ridiculous," said Sean Baumgartner, cemetery director.

The Chicago chapter of American Veterans for Equal Rights was dedicated in May 2015 and was one of the first monuments of its kind in a national cemetery. The organization said in a statement Thursday, "The memorial at ALNC represents the service and sacrifice of all Americans, and as such is an affront to everyone, and disrespectful to our fallen veterans."

And while the perpetrator may not have realized it, the crime they committed by defacing the monument carries extra weight.

"Any kind of damage to federal property is an enhanced penalty. So that person would face state charges and possibly federal charges for damaging a national monument," said Chief Fred Hayes, Elwood Police Department.

Veterans visiting the cemetery Thursday said it was terrible that anyone would vandalize a monument, especially one honoring those who have served this country.

"For someone to do something like that is abominable," said Donald Koskiewicz, veteran.

"Absolutely no excuse, no. I hope they find who they are and teach them a lesson that they should be not so judgmental," said veteran William Fleck.

"It would be nice if they would just come up and confess, and make things right, because this is a place of honor. They didn't honor this place," Baumgartner said.