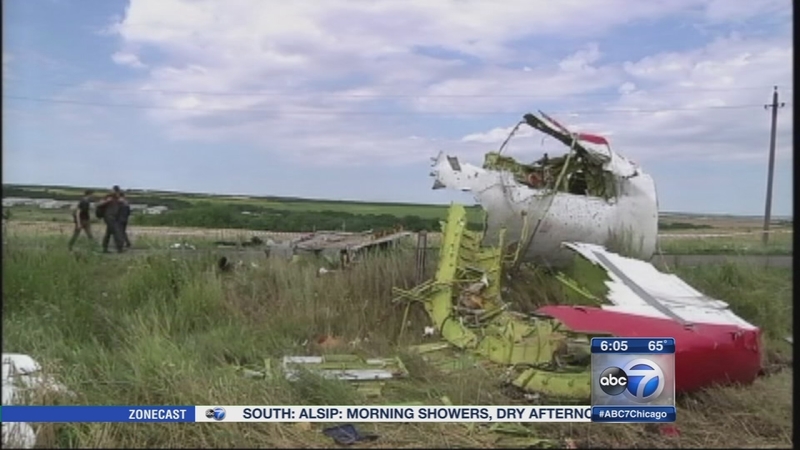 THE HAGUE, Netherlands -- Malaysia Airlines Flight 17 was likely struck by multiple "high-energy objects from outside the aircraft," causing it to break up over eastern Ukraine, a preliminary report into the deadly aviation disaster concluded Tuesday.

The report by the Dutch Safety Board stopped short of saying the Boeing 777 was shot down by a missile but its findings point to that conclusion. It also did not say who might have been responsible.

The Boeing 777 suddenly plunged out of the sky July 17 over territory held by pro-Russian rebels in Ukraine, killing all 298 passengers and crew on board.

"The damage observed in the forward section of the aircraft appears to indicate that the aircraft was penetrated by a large number of high-energy objects from outside the aircraft," the report said. "It is likely that this damage resulted in a loss of structural integrity of the aircraft, leading to an in-flight break up."

The board is leading the international investigation into the cause of the disaster. Its full report is expected within a year.

"The initial results of the investigation point toward an external cause of the MH17 crash," the board's chairman, Tjibbe Joustra, said in a statement. "More research will be necessary to determine the cause with greater precision. The Safety Board believes that additional evidence will become available for investigation in the period ahead."

Christopher Yates, an aviation safety specialist at Yates Consulting, told The Associated Press the report "is extremely consistent with damage from a missile for the simple reason there are penetration marks.

"It must have been moving at very high velocity to create the damage," he said. "It could only be a missile of the type that would reach the altitude that would have struck the aircraft" - potentially a Buk missile.

He said the report gave no indication whether the missile had been fired from the ground or from another aircraft, but it likely came from the ground as there were no military aircraft known to have been flying at the time.

The missile could not have been shoulder-fired because it would not have reached the necessary altitude, Yates added.

Malaysian Prime Minister Najib Razak welcomed the report, saying in a statement that its key conclusion "leads to the strong suspicion that a surface-to-air missile brought MH17 down, but further investigative work is needed before we can be certain."

Because of fighting between the Russian-backed rebels and Ukrainian forces, investigators from the board have not visited the fields in eastern Ukraine where the wreckage of Flight 17 plunged to the ground. That likely contributed to the board's cautious assessment of what happened.

"Detailed examination of the structural damage is ongoing," the report said. "Forensic examination will be performed if the wreckage can be removed."

Razak said Malaysian investigators were sent to Ukraine on Monday.

"It is of the utmost importance that the investigation teams gain full and unfettered access to the crash site, in order to recover all human remains, complete their investigation and establish the truth," he said. "We owe it to the families, who are in our thoughts today."

Australian Prime Minister Tony Abbott also said the findings "are consistent with the government's statement that MH17 was shot down by a large surface-to-air missile."

He added "the international community must remain focused on finding, prosecuting and punishing the perpetrators of this cowardly attack. We owe this to the innocent victims of the MH17 downing and their families."

Dutch Prime Minister Mark Rutte said the leader of a Dutch team aiming to recover bodies and belongings was heading to Ukraine on Wednesday and other investigators were ready to return to the crash scene whenever it is safe enough for them to work.

"There is still a long way to go," Rutte said. "We owe it to the next of kin to do our utmost to recover human remains and personal belongings, to give clarity about what happened and to bring to justice those responsible."

Investigators so far have studied photos of the crash site, radar data and information gleaned from the downed jet's "black boxes" - its cockpit voice recorder and flight data recorder. They all indicated that there was no technical fault that may have caused the plane to disintegrate.

The cockpit voice recorder "revealed no signs of any technical faults or an emergency situation," the Safety Board said. "Neither were any warning tones heard in the cockpit that might have pointed to technical problems."

The separatists officially deny having shot down the plane. They maintained that stance Tuesday, with Alexander Zakharchenko, a top rebel commander in Donetsk, quoted by Russia's Kommersant newspaper as saying "we simply don't have the technology that would have allowed us to shoot down the Malaysian plane."

However, just three hours before the plane was shot down above rebel-held territory in eastern Ukraine, the Associated Press reported on the passage of a Buk M-1 missile system - a machine the size of a tank bearing four ground-to-air missiles - driving through the rebel-held town of Snizhne near the crash site.

A highly placed rebel officer told the AP in an interview after the disaster that the plane was shot down by a mixed team of rebels and Russian military personnel who believed they were targeting a Ukrainian military plane. Intercepted phone conversations between the rebels released by the Ukrainian government support that version of events.

In those tapes, the first rebels to reach the scene can be heard swearing when they see the number of bodies and the insignia of Malaysia Airlines.