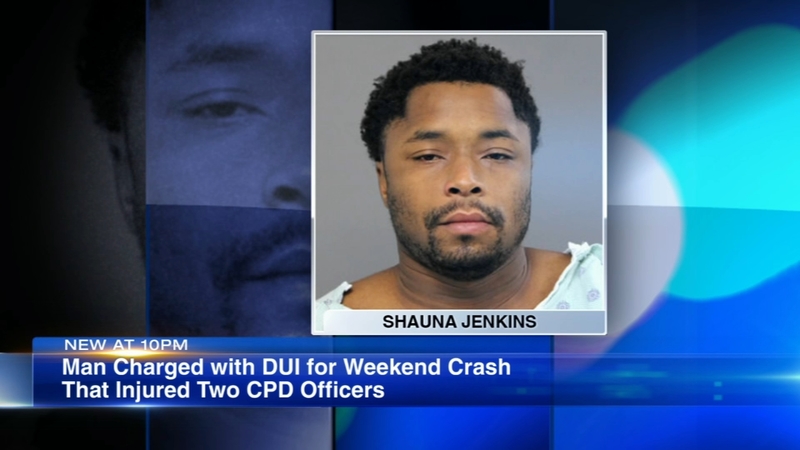 CHICAGO -- A man has been charged with a felony DUI in a crash that injured two Chicago police officers over the weekend.

According to police, two officers were traveling southbound at about 12:40 a.m. Sunday in an unmarked SUV in the 400-block of Central Avenue with their "emergency equipment engaged" when they were struck by another vehicle in the intersection.

Police said the driver of a Chrysler sedan was traveling westbound on Race Avenue when the car struck the police vehicle. The crash caused the police car to hit a light pole. The two officers were taken to Stroger Hospital with non-life threatening injuries.

Shauna Jenkins, 26, of Chicago is charged with one felony count of Aggravated DUI, one misdemeanor count of driving under the influence any amount of drug, two misdemeanor counts of driving under the influence of alcohol, and three traffic citations for failing to yield to an emergency vehicle, operating an uninsured motor vehicle and driving without a license.

Jenkins was taken to Mount Sinai Hospital, where his condition was also stabilized, police said.

He appeared for a bail hearing Tuesday before Judge Susana L. Ortiz, according to Cook County court records. She set his bail at $150,000 and his next court date for July 16.