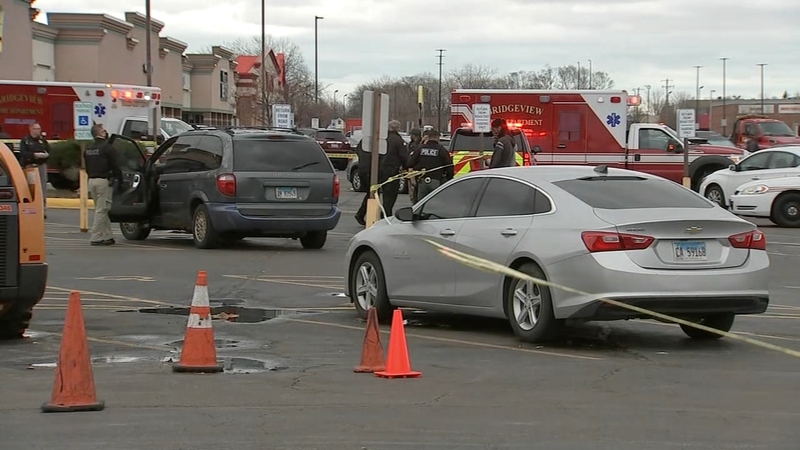 Man killed in shooting outside Bridgeview Secretary of State facility

BRIDGEVIEW, Ill. (WLS) -- Bridgeview officials said a man has died after being shot outside of a Secretary of State facility Wednesday afternoon.

Police said the shooting happened around 1:35 p.m. in a parking lot outside the Illinois Secretary of State facility on West 87th Street.

The victim was shot several times and taken to Christ Hospital in critical condition, Bridgeview village officials said. He later died at the hospital, according to police.

Bridgeview Police Chief Ricardo Mancha gives an update after a man was shot several times while standing in line outside a Secretary of State facility.

Bridgeview police said the victim was standing in line waiting to go into the driver's license facility when one or more people ran up to him and started shooting. At least two dozen shell cases littered the sidewalk outside of the facility.

The suspects then jumped into a car and fled.

No one else standing in line was injured, nor was anyone inside the driver's license facility, which police partially credited to the mandated six feet of social distancing in the line to get into the facility.

Video captured people running as gunfire was heard outside a Bridgeview Secretary of State facility Wednesday.

"I think that helped a lot in the fact that the only one person was shot because of the six foot distance between people," said Police Chief Ricardo Mancha. "Only he was targeted and only he was hit."

The victim was identified by a village spokesman as 21-year-old Jawaun Davis.

Police chased the suspects' car to near 99th and Roberts Road. Two people were taken into custody around 2:45 p.m., the suspected shooter and a person believed to be his accomplice, police said.

The two people arrested have not yet been identified.

Police said they believe the shooting was intentionally planned, targeting this victim. They do not believe there is any danger to the public.
Report a correction or typo
Related topics:
bridgeviewcrimedeadly shootingfatal shootingshootingviolenceman killed
Copyright © 2021 WLS-TV. All Rights Reserved.
SHOOTING