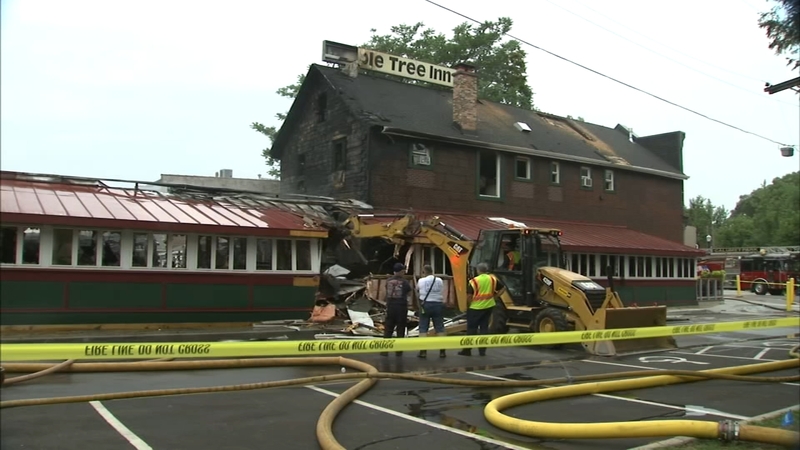 The well-known, Cajun-Creole-style restaurant is located at the intersection of Old Western Avenue and Canal Street, along the Cal-Sag Channel.

Crews from about 20 fire departments helped battle the blaze. Officials said the fire started around 2:45 a.m.

They continued to chase hotspots in the building later Friday morning and kept an eye on a ruptured gas line that fed the flames inside. They plan to let it burn off, but Nicor will have to dig up the street to find the rupture.

But the Blue Island fire chief said the bulk of the fire was under control before 6:45 a.m.

The owners of the Maple Tree Inn, Erich Wennberg and Kaite Orr, lived on the top floor. They told fire fighters they heard a pop in the back of the building before the fire started. They went back to bed and woke up to the fire alarms going off.

They were able to get out safely. No one inside was injured.

Two fire fighters sustained minor injuries. One firefighter hurt his back and another cut his hand. They are expected to be OK.

People who live and work in the neighborhood said the Maple Tree Inn was a vibrant business that brought the community together. The Maple Tree Inn opened its doors in 1975. The restaurant is also known to ABC7 viewers, since it was featured by our Hungry Hound Steve Dolinsky in the past.

and this is exclusive video. The owners talked about why the Maple Tree Inn is so special.

"We serve up classic New Orleans dishes, such as our signature dish, the hickory barbecue shrimp and grits," Katie Wennberg said.

The Inn was named among the 50 Best Southern Restaurants in America for 2018 by OpenTable.

Tom Hecht has worked here for 30 years as a cook, with a lump in his throat he called this his second home.

"I had to come down because I didn't know and now, it's just this is like a nightmare," Hect said. "I wish I'd wake up from it."

Business owners next door said they plan to rally around the owners and do whatever they can to help them. An ad on the website featured a "Barbecue, Brews and Bluegrass" festival that was scheduled for Sunday.

"It's a destination to come to and they were the reason so many people came here," said David Brown, owner of the Rock Island Public House. "Our business would not have existed if it wasn't for them."

"While we are devastated emotionally by this tragedy, we want to assure everyone that no person was hurt in the fire. The Maple Tree Inn has had multiple, successful chapters and there will be many more. Our team of employees is one of the best ever assembled in our 43 years of business and we will rebuild around them. We want to praise the fire fighters' swift response and work in keeping our neighboring businesses safe and attempting to preserve the character of the building. The State Fire Marshall is leading the investigation at the moment."

"They do belong to a special district here, a business district. We'll see what funds are available for that," Mayor Vargas said.

The cause of the fire remains under investigation. Fire investigators said they have ruled out foul play.