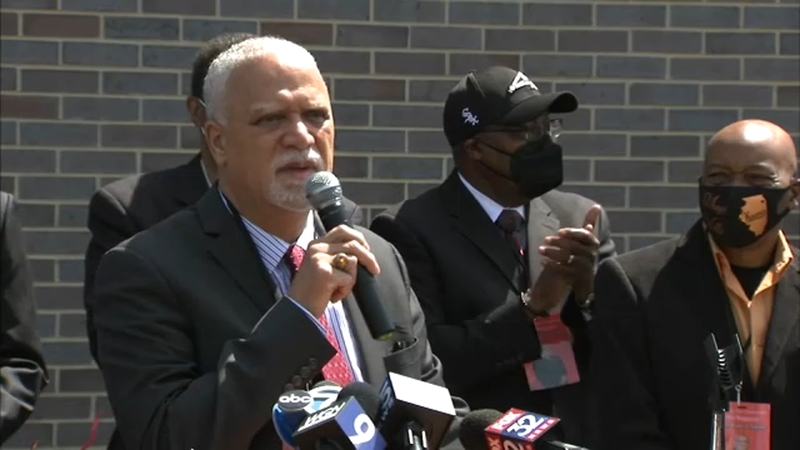 MARKHAM, Ill. (WLS) -- Despite being re-elected just a few weeks ago, Markham Mayor Roger Agpawa isn't sure how much longer he will be allowed to serve.

An appellate court overturning a lower court decision Thursday that goes back to 2018 when Agpawa was allowed to take office despite being convicted of mail fraud more than 20 years ago. In Illinois, felons are not allowed to hold municipal office.

RELATED: Roger Agpawa sworn in as mayor of Markham after legal fight

Now Agpawa is pushing back.

"We are here about restorative justice," he said.

He surrounded himself Saturday with supporters, including several elected officials, as he maintained that his past transgressions should not stop him from serving.

"We want people to redeem themselves, and they do and then we run them out. We can't have it both ways," Mayor Agpawa said. "Restorative justice in all forms is important. It is a national issue, not a Markham issue. It is not a Roger issue. It is why we have people in the streets protesting."

Agpawa won re-election with over 80% of the vote, but those who opposed him also came out this weekend, including Markham Police Officer Kenneth Muldrow. Muldrow maintains that his name was illegally taken off the ballot when attempting to run against Agpawa in this past election.

"The state's attorney should block him from taking office because he shouldn't be in office," Muldrow said. "Because he is a convicted felon and he can only be pardoned by the President of the United States."

The mayor is calling on the president to issue such a pardon. He's also asking the Illinois Supreme Court to listen to his case, however, time is not on his side.

"Do I have to just continue to be resentenced? Do I have to reserve and relive what I did," Agpawa asked.

"If you want to accept his story that he has been redeemed, that he should be restored --then you need to change the law," Washington said. "Because right now the law says it doesn't matter what you've done since you've been convicted, you cannot serve. At least according to the appellate court."

In 2017, Agpawa was elected mayor of Markham. At the time, former Illinois Governor Bruce Rauner restored his citizenship rights.

Now, this new reversal says Rauner did not have the authority to do that, and some people out protesting Saturday against Agpawa agree.

"It is going to be a lot of pressure on the county clerk to make a decision about certifying the election. If it is not certified who is the mayor and who will serve,' Washington said.

While the mayor is slated to take the oath of office for a second time May 6, the election remains uncertified by the county clerk. The deadline to do so is Tuesday.