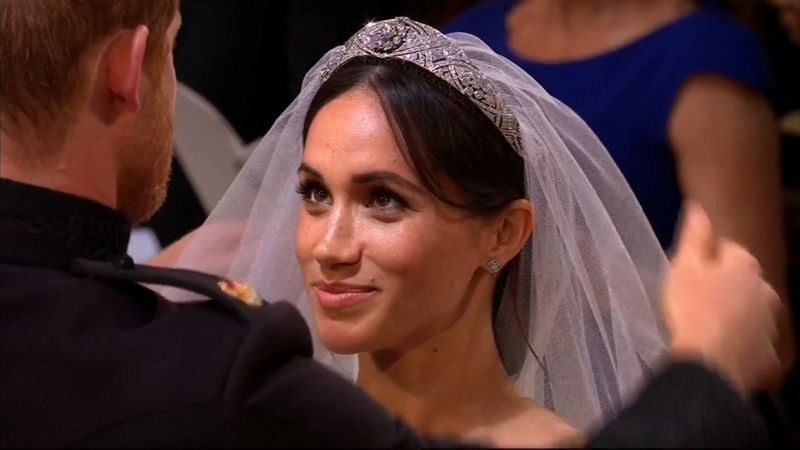 The Duchess of Sussex has revealed she hid a romantic memento to the first date she had with Prince Harry as the "something blue" within her wedding outfit.

In a sneak peak of "Queen of the World," Meghan is seen reunited with her bridal outfit for the first time since she wed Prince Harry ahead of it being displayed in an exhibition in October.

"Somewhere in here there is a piece of, did you see? There's a piece of blue fabric that's stitched inside? It's my something blue," Meghan revealed while gently inspecting the bridal ensemble.

"It's fabric from the dress I wore on our first date," she added with a wide grin.

She also said she didn't see her finished veil until the morning of the wedding.

The 16.5-foot silk tulle veil was hand-embroidered in silk and organza and famously featured flora representing the countries of the Commonwealth.

"It was important for me, especially now being a part of the royal family, to have all 53 of the Commonwealth countries incorporated," the duchess said, as quoted on the ITV website.

"I knew that it would be a fun surprise as well for my now husband, who didn't know, and he was really over the moon to find out that I would make this choice for our day together."

The touching reminder wasn't the only tradition the bride participated in on the day as her "something borrowed" came from the monarch herself.

Queen Elizabeth lent Meghan the Queen Mary's diamond bandeau tiara which held the veil in place. It was made in 1932, with the entire brooch dating back to 1893, according to Kensington Palace.

The royal newlyweds will visit Australia, Fiji, the Kingdom of Tonga, and New Zealand in a tour to coincide with the Invictus Games which is being held in Sydney from October 20 to 27.

Prince Harry founded the Invictus Games, a sporting event for wounded or sick servicemen and veterans, in 2014. It's held in a different city every year.

The Games also hold extra significance for the royal pair as they made their first public appearance together at the 2017 Games in Toronto, Canada.

The documentary "Queen of the World" premieres on September 25 on ITV before airing on October 1 on HBO.