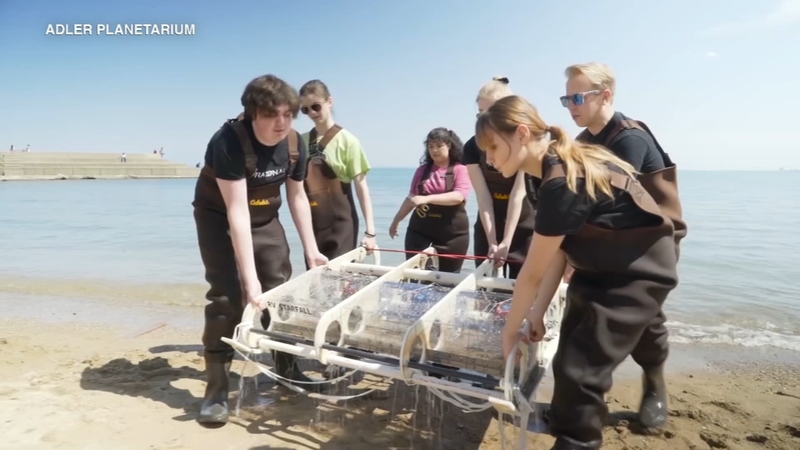 The atmosphere smashed it into thousands of little pieces, which fell in Lake Michigan, according to radar.

And then the hunt was on!

Teens with the Adler Planetarium's Aquarius Project are among those hunting. On Tuesday, they will deploy their unique underwater sled to retrieve the meteorites.

"We're thinking there are thousands of these marble to golf ball-size pieces at the bottom of the lake," said Chris Bresky, who created the Aquarius Project.

Bresky's team is made up of more than 100 Chicago area high school students who worked a year and a half to build the meteorite-hunting device.

On Tuesday, a group will head out into Lake Michigan -- about 10 miles off the coast of Manitowoc, Wisconsin -- in hopes of retrieving a few of those thousands of pieces at the lake's bottom, which is 180 feet deep at that site.

"The thought of bringing meteorites up from the bottom of Lake Michigan is just incredible, in that this entire project has been almost entirely teen led," said Jack Morgan, an Adler student intern.

The teens have been testing the equipment over the past few months to prepare for their first attempt on Tuesday.

But, even if they don't find any meteorites, the teens can be proud that they created -- from scratch -- all the new hardware.

If they do retrieve a meteorite from the bottom of Lake Michigan, it would be a big deal.

"Honestly, that would be amazing. I never thought I would do anything like this. That would just be super cool," said Jarred Scales, an Adler student intern.

"It means a lot that the planetarium would trust us with and really empowering that we could create things that give us a power to learn," said Noa Chor, another teen who worked on the project who is heading to Harvard University.

Some scientist are skeptical they will find anything. It is like finding a needle in a haystack. But if they do, it will be a huge scientific achievement.

This project is also significant because this is the first time scientist from Adler, the Shedd Aquarium and the Field Museum have worked on a big project.