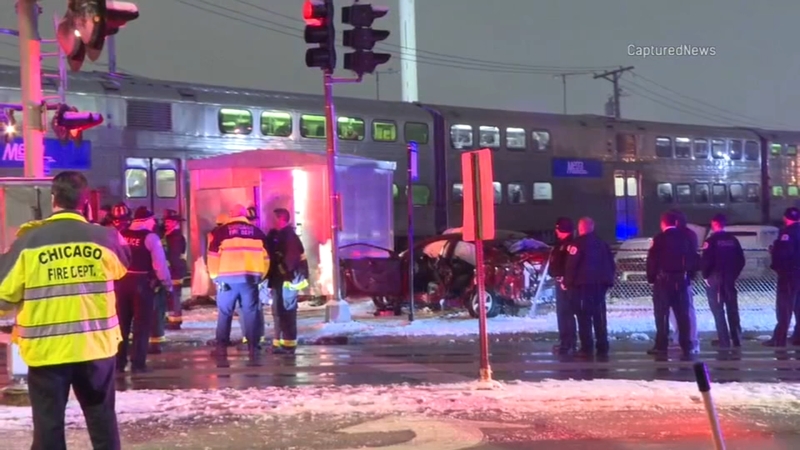 CHICAGO (WLS) -- A man has died after a crash involving a car and a Metra train that seriously injured three other people last Wednesday in Chicago's Scottsdale neighborhood.

The crash occurred at 87th Street and Pulaski Road at about 7:30 p.m. as a SouthWest Service train hit a car, which then hit a pedestrian.

The pedestrian was pronounced dead on Friday. He has been identified as 19-year-old Christopher Davis of Homewood.

Three people in the car were seriously injured.

Surveillance video shows the moments leading up to the crash. The video shows the crossing gate go down right on the car's trunk. The driver appears to put the car in reverse and then back in drive as the train heads toward the intersection.

Metra released a statement Thursday night, saying, "Safety is always Metra's highest priority. This crossing is equipped with several warning devices, including lights, bells and quad gates, and we know those warning devices activated last night. We also know the engineer sounded his horn at the crossing as required. The incident remains under investigation."

Attorney Ben Crane said he put up the camera that captured Wednesday's crash several months ago.

"We were essentially collecting evidence to prove that this no man's land they have created here by the way they're operating this crossing is super dangerous," Crane said.