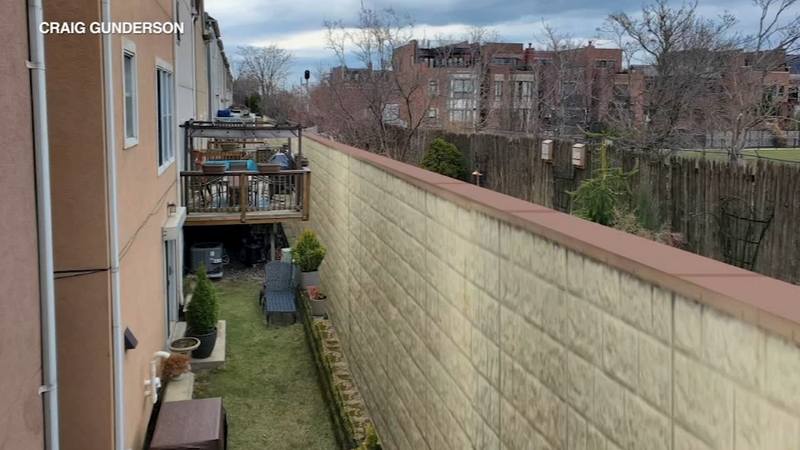 CHICAGO (WLS) -- Some people buy homes for their skyline view or the outdoor space, but what if it was all replaced with a large wall?

Metra plans to build a wall alongside several townhomes. It could be 9 to 13 feet high. The giant wall would be just outside their doors, and the Metra tracks would be even closer to their homes. All of it has been worrying residents.

Neighbors have been dreading the plan to build a Metra wall on the railroad's property line within feet of their patio doors.

"We won't have any vegetation anymore. We have lots of trees, the trees will be gone and it will just be replaced with what resembles a prison wall," said Christie Calmeyn.

The wall would be right up against dozens of Lakeview townhomes, including many located in the Picardy Place subdivision, where these residents live. Craig Gunderson made renderings of what he thinks it all may look like.

"They've stated that it would begin one foot outside of the property, our property line," Gunderson said.

Behind the wall, Metra tracks will be moved 20 feet closer to their homes. The fence currently between the two would be removed.

"Where we're sitting actually is where they're proposing to move the track over. So you and I would not be able to have this conversation with their train coming right down the middle of the backyard. We wouldn't be able to enjoy the outdoor space. I enjoy gardening, I enjoy the birds the nature. It would all be gone essentially just wiped out," said Sarah Jackson.

It's all part of an infrastructure improvement project to replace several bridges along Metra routes more than 120 years old.

"There are, unfortunately, homes that were built very close to the property line in the last decades. And those houses right now, they have a small yard and then a slope going up to the tracks. And that slope has kind of been part of their backyard all this time," Metra spokesperson Michael Gillis told the I-Team.

He said the movement of the tracks and the wall are all being constructed on railroad property, which residents have been allowed to use as their own outdoor space. Currently, a fence sits between the outdoor space and the tracks.

"It is their property, like I have no legal leg to stand on as far as, like, telling them that they shouldn't come here and rip all of this up. But they should be good neighbors about it," said Gunderson.

Residents are also concerned about property values. But most of all, they're worried about safety if the top of wall comes too close to second-story patio decks.

ABC7 asked Gillis what Metra has to say to residents who are concerned about their safety and their livelihoods.

"We chose this option because it's the best for the region. It's the best for the federal, state and local taxpayers that fund us. It's best for our riders it allows us to keep two tracks open. We've looked at other options that we looked at a variety of other options, including one suggested by some in the community that we actually tried to build the first new track on the east side of the existing. There's just not enough space on that east side," Gillis told the I-Team.

"There's a better way think about this entire community. Think about being a good neighbor," Calmeyn said.