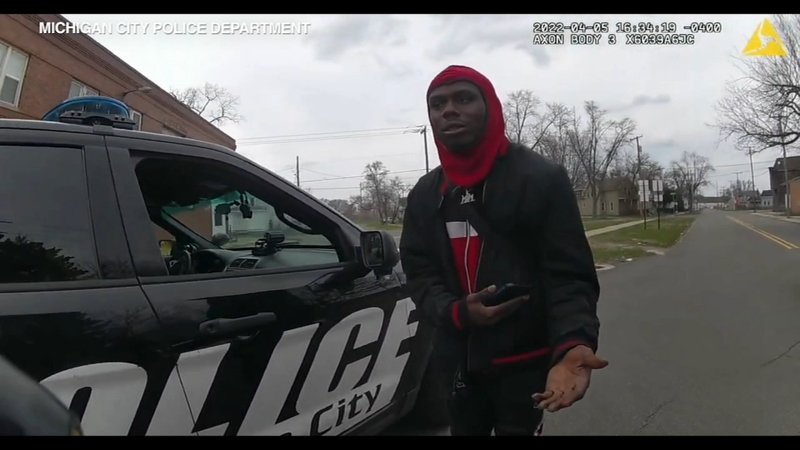 Warning: Images in this report are graphic

Police said the incident began Tuesday because the man matched the description of someone involved in a report of a suspicious vehicle.

But the family of 26-year-old Tahir Kelly said his injuries are too severe for them to believe what police tell them happened.

The bodycam video released Thursday afternoon comes from a single camera and depicts what Michigan City police said is the entire interaction between their officers and Kelly until he was loaded into the ambulance. They said its content shows the extent of the officers' actions and justifies the means used.

Kelly's family insists the entire episode should never have happened. Whether it was justified use of force or not depends on who you ask.

The 18-minute bodycam video shows an interaction from April 5. In it, we see officers stop Kelly as they are searching for what they said was a suspicious vehicle chasing two men on foot, indicating one of the two men might be armed.

In the moments that follow, police said Kelly gave them varying false names before running off as they tried to place him into custody.

The officer wearing the camera can be heard asking Kelly his name. After Kelly gave a response, the officer then briefly goes back to his squad car before returning to question Kelly more.

"Son, what's your real name?" the officer asks. "Because now you're working your way into something else."

"My last name's Kelly, but that is my date of birth," Kelly responds.

"So you still lied. Your name is Benson or Kelly?" the officer says.

"I just got married. I'm not lying. My wife's name is Mary Benson," says Kelly.

"Why did you take your wife's name?" the officer asks.

Still unable to confirm his identity, the officer moves to arrest Kelly, but he runs. Kelly don't get far; after the officer deploys his Taser he falls head first to the pavement. Moments later his face appears scraped and bloodied.

"Unfortunately, it happened rather than on soft grass, it happened on a rough concrete," said Michigan City Mayor Duane Parry.

His family, however, insists there is more to it, releasing a graphic hospital photo showing the severity of Kelly's facial injuries.

"If you're tased and you fall. How do you get scrapes? How is the whole side of your face scraped," asked Kelly's mother, Derris Baylor. "All his teeth are up and he has to get them out. And we was told they may have to take him to Indianapolis to get surgery because his face is fractured."

Kelly's family was shown the bodycam video Wednesday. Baylor said she closed her eyes before her son was tased, unwilling to see what happened next.

The family did not address the police department's claim that they recovered a weapon from Kelly, which is also shown in the video and which police said Kelly did not have a permit to carry.

The video released does not show any further altercation, even after police find the gun. Paramedics arrive minutes later.

Kelly's family insists he was not the person police were looking for and should not have been stopped to begin with.

"Two different individuals share with the officer who tased Tahir that Tahir wasn't the person they were looking for and yet he got tased," said Cannon Lambert, an attorney with Karchmar & Lambert, P.C.

In a statement released Thursday afternoon by police, along with the bodycam video, police make it clear they believe the matter to be settled.

"Additional information pertaining to this incident will not be released at this time in order to protect the integrity of this ongoing investigation," the statement said.

"I don't care what they talk about in this video, my brother was no threat," said Kelly's sister, Ebony Baylor. "Regardless of what my brother did, everybody got training. Everybody in law enforcement got the escalation tactic training. My brother should not look like that."