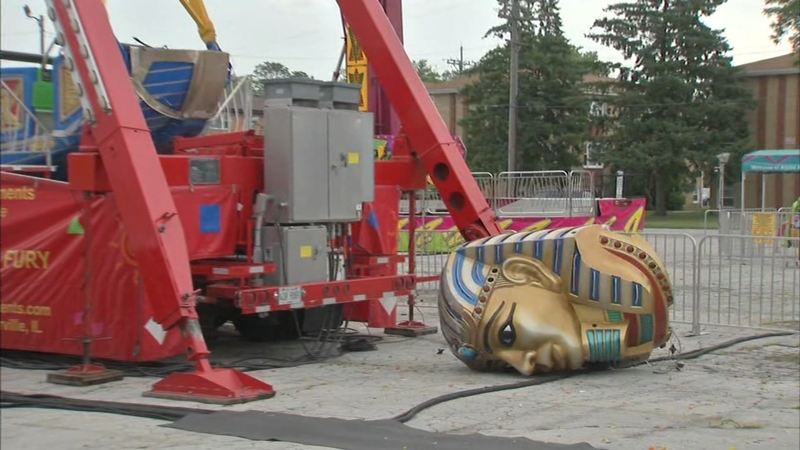 MIDLOTHIAN, Ill. (WLS) -- A 9-year-old boy is recovering after he was hit by debris from a collision between two rides at a carnival in south suburban Midlothian Thursday evening, fire officials said.

The accident occurred at the St. Christopher Parish Fest at 147th Street and Karlov Avenue.

CARNIVAL CRASH: One little boy injured at Midlothian carnival after two rides collide. The child was hit with debris that flew into the crowd and rushed to a local hospital. @ABC7Chicago pic.twitter.com/qjPqnIVhVy

A 9-year-old boy who was standing on the ground below was hit with debris. He was with his parents at the time. He was bleeding from his head and rushed to the hospital.

"We're sitting behind the head when it fell off and the pieces fell off and hit the kid," said witness Averi Brown. "We looked down and it was laying on top of him and his head was full of blood."

Paramedics transported the boy to a local hospital. St. Christopher's Pastor Kris Paluch visited the boy in the hospital and said he was badly bruised and had injuries to his head.

"He is in a lot of pain, a lot of bruises here and there," Pastor Paluch said. "They were running a lot of tests even when I was there."

People who were riding Pharaoh's Fury at the time said the Freak Out didn't have anyone on it, and was just running a test ride. The pastor said the rides were very close together.

Alpine Amusement Company out of Naperville set up the carnival. The State of Illinois's Amusement Ride and Attractions Safety team said they inspected their rides back in May.

The church asked for another inspection before they would allow the rides to operate again. The inspection was completed and the rides passed, so they were open again as of 6 p.m., church officials said.

About 2,000 people are injured by carnival rides every year, out of 1 million riders nationwide, according to the Outdoor Amusement Business Association. Only a small percentage of those injuries require an overnight hospital stay.

But some of those riding Pharaoh's Fury said they're unsure if they will ever come back to a carnival.

"I am so scared to be around here because that kid wasn't even on the ride and he got hit," said Morgan Taylor, witness.

There was also another incident at a Plainfield carnival. One woman was thrown from a ride and injured.