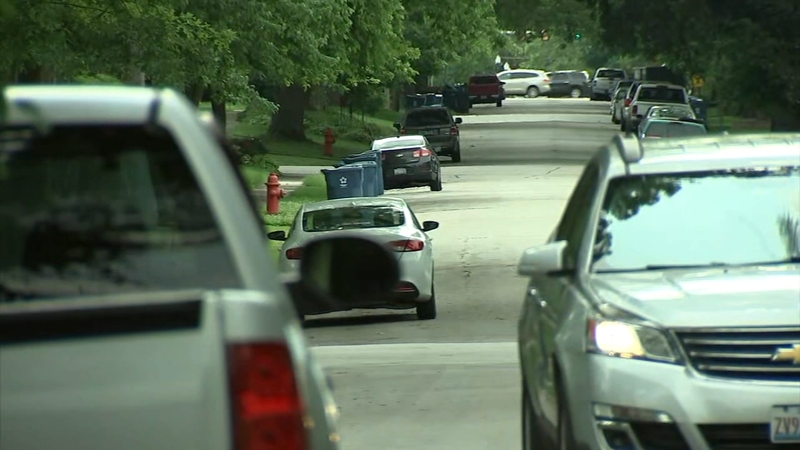 MORRIS, Ill. (WLS) -- Morris officials said an evacuation order for a massive industrial fire will lift Friday, as they continue to make progress fighting the blaze.

Morris officials lifted the evacuation order for over 3,000 people at 4 p.m.

Officials said the evacuation order in place due to the Morris lithium battery fire will lift Friday.

Officials evacuated the southeast side of Morris after the fire broke out Tuesday, as toxic fumes and smoke emanated from the building, stemming from as many as 200,000 lithium batteries exploding.

Some residents who had been kept out of their homes for three days came back as soon as authorities opened up the streets.

"I'm so happy to be home," Mareli Feliciano said. She had almost no time Tuesday afternoon to pack up whatever she could as well as her three pets and get out. She has spent the time since then at a hotel, waiting to be able to return home.

The Red Cross is handing out cleaning supplies at the high school. Health officials are urging residents to do a basic cleaning.

"It's important to wipe that dust away with a microfiber cloth, and then just use regular dish soap and water to wash anything outdoors: playsets, kids' toys," said Michelle Pruim, Grundy County Health Dept.

"Right now, the game is to let it burn itself now, the way it is, it's been Burn itself out.. right now it's controlled."

The EPA has placed air quality monitors around the town of Morris, including right at the entrance of the building. So far, they have found no evidence of harmful contaminants getting into the air.

Drone video shows small clusters of fires with ash and debris scattered around the building. Thermal imaging shows the hottest cores of the fires.

They have also been able to fly a drone inside the plant. It has thermal imaging capability to help identify any hot spots that come up.

Residents returning to their homes said they have some concerns about it, but they are trusting authorities who say it's safe at this point.

"I feel like they wouldn't release us back to the house if it wasn't safe to go back," evacuated resident Eyin Stanford said.

Morris officials give an update on the work being done to extinguish a fire at an industrial site.

Official said Thursday morning they "made a lot of progress" using Portland cement mix to fight the massive industrial fire at an abandoned paper mill and that it was "in check."

Morris Fire Chief Tracey Steffes said they have used 28 tons of Portland cement to smother the burning lithium batteries, and there was no longer any active burning at the site.

Chief Steffes said that the unconventional method appears to be working, but warned it is possible the batteries could continue burning since they do not need oxygen to burn. At least three hot spots have flared up, Steffes said.

"When we smothered it with the concrete, we're not 100% sure that this thermal runaway is not continuing," Chief Steffes said. "It is probably continuing and hopefully it is going to consume what is left of the batteries underneath then it will be over. But there is a possibility that as this continues that it does break through this Portland cement."

"We brought over 1,000 pounds of Purple-K, and we introduced that to the fire hoping we could kill it and choke it out," Steffes said. "The lithium fire laughed at the Purple-K - didn't put a dent in it."

Steffes said he has consulted with experts on how to fight the fire without making it more of an environmental problem than it already is.

The Morris fire chief said his crews are working to smother a massive industrial blaze.

Morris Mayor Chris Brown said the city was not aware lithium batteries were being stored at a warehouse that is now the site of a massive fire.

Visit GrundyCo.org for more information on what to do when returning home.

The Red Cross and Salvation Army will provide supplies for those returning home at the Morris High School football field between 4 and 5 p.m. Friday.

Residents are still encouraged to call the emergency hotline at 815-941-3408 with questions.

Some residents might have lost power, Steffes said, so food safety is also important after the evacuation order is lifted.