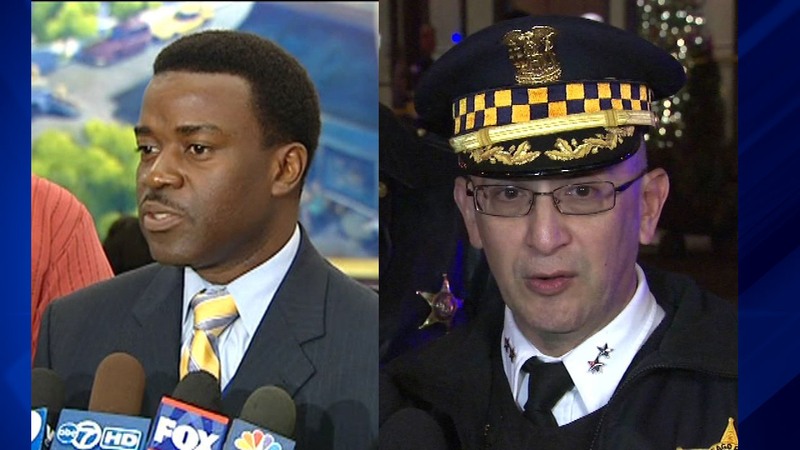 CHICAGO (WLS) -- Chicago Police First Deputy Supt. John Escalante, who was twice passed over the city's top cop job, has a foot out the door of police headquarters.

Escalante is a finalist for campus police chief at Northeastern Illinois University (NEIU), the I-Team has learned. On Wednesday, the 30-year CPD administrator was at NEIU meeting with the university's president, administration leaders and students.

He's not the only one.

In addition to Escalante, the I-Team confirmed a third finalist for the job - CPD Internal Affairs Cmdr. Eddie Welch. He had a full day of interviews at NEIU last week.

Between the two of them, an Escalante/Welch departure would drain CPD of two of its richest assets.

Chicago police Supt. Eddie Johnson told the I-Team: "While the (campus) selection process is ongoing and other candidates are in the mix, this is a personal decision he will continue to support John Escalante and Eddie Welch no matter what."

Johnson said CPD is completely prepared for any potential transition and would not experience any operational gaps.

Escalante served as interim superintendent after the firing of Garry McCarthy late last year, but didn't get the permanent job despite wide support from police and Latino alderman. He was also passed over for superintendent in 2011 when McCarthy landed the spot from New Jersey.

Welch has held a wide array of CPD command jobs during a long career with the department, currently overseeing Internal Affairs at a sensitive time when officer conduct is under moment-by-moment scrutiny.

Escalante and Welch are among four finalists for the job, pared down from at least 40 applicants. The other two final candidates are a current campus police lieutenant, Paul Kruszynski, who is now the acting chief, and Scott Pickett, a U.S. law enforcement official. Pickett, a one-time Dallas patrolman, is retiring this month from his post as assistant supervisor of the Federal Air Marshal Service in Chicago.

The position opened up when veteran NEIU chief James Lyon Jr. resigned in March for similar job in Georgia.

NEIU has an enrollment of 10,000 students and a 67-acre campus on the Northwest Side of Chicago.

The last NEIU police chief was paid about $114,000 annually. The open position doesn't have a salary affixed to it and the job description says pay will be based on candidate experience and credentials.

An NEIU spokesman say there is no timeframe on the decision but fall classes start in a month.