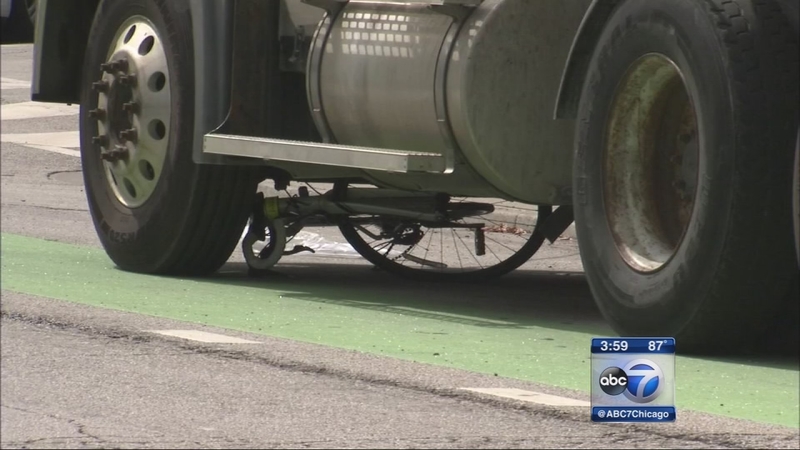 CHICAGO (WLS) -- A 20-year-old Rolling Meadows woman was fatally struck by a semi truck while riding a bicycle in the West Town neighborhood on Chicago's Northwest Side Tuesday morning.

Like hundreds of bicyclists on Milwaukee Avenue, Lisa Kuivinen was riding in the direction of downtown Tuesday morning when she was hit by an Illinois Brick Company 18-wheeler carrying a load of bricks. Kuivinen was dragged underneath the truck near North Racine Street.


Her white bicycle could be seen sitting under the cab of a semi truck with its lock thrown a few feet away.

Resident Luke Kras looked out his window and saw the horrific scene just as the driver realized what happened.

"He got out of the semi looked underneath the truck and the immediately started to call police, body under first set of wheels," Kras said.

Paramedics were on the scene quickly, but it was too late for Kuivinen.

Kuivinen was a BFA student at the School of the Art Institute of Chicago, the school confirmed. A spokesperson for SAIC issued a statement saying, in part, "We are shocked an saddened to learn of the tragic loss of a member of the SAIC family. We extend our heartfelt condolences to Lisa's family and friends during this very difficult time."

Counseling services will be available to students, faculty and staff, the SAIC spokesperson said.

She was hit while riding in the green painted bike lanes. Milwaukee Avenue is one of the city's busiest bike corridors. Residents and business owners on the stretch near Racine say the volume of traffic during rush hour has been considered an accident waiting to happen.

"There are construction crews, regular traffic. Add bikes to it, not a good mix," said Bill Zigmond, an area business owner.

"Motorists need to be aware of surroundings, but the problem is there is a blind spot," said Lynn James, who works nearby.

Employees and residents said the block between the bridge over the Kennedy and Racine is dangerous because one half of the street has protected bike lanes and other does not.

With construction in the area, many complain there is little room on the unprotected side for big trucks and bikers to share the road - the same side of the street where Kuivinen was killed.

"If the city is going to promote bikers, there needs to be adjustments made on the road for the safety of everyone," Kras said.

"Anything you can do to change the pattern of cycle traffic should be carefully considered," resident Kim Miller said. She said she and her husband called the

The Illinois Brick Company did not provide a comment.