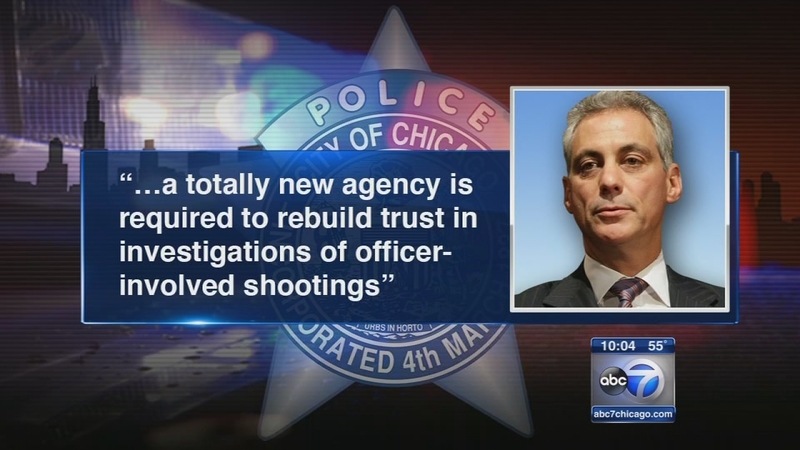 CHICAGO (WLS) -- In an Op-Ed to be published in the Chicago Sun-Times on Sunday and available online now, Mayor Rahm Emanuel reveals he is planning to replace the Independent Police Review Authority (IPRA) with a civilian agency.

IPRA investigates police shootings and allegations of police misconduct in the city. After video of Laquan McDonald being shot was released last November, community leaders demanded accountability and that included those who investigate police misconduct.

"Will we use this episode and this moment to build bridges that bring us together as a city?" Mayor Rahm Emanuel said in November 2015. He promised change 13 months after Officer Jason Van Dyke shot Laquan McDonald 16 times.

While Emanuel praised Sharon Farley, the new head of IPRA, in the op-ed, he wrote: "...it is clear that a totally new agency is required to rebuild trust in investigations of officer-involved shootings and the most serious allegations of police conduct."

In a statement, Fairley wrote: "This is an important and necessary first step toward the true reform we have all been working on for the past several months. We know that in order for police accountability to be truly effective it has to have the support and trust of the community. I believe this commitment will start the process of building a system that will engender that trust. I look forward to working with the community, the alderman and the Mayor's Office to bring about the changes the citizens of Chicago expect and deserve."

The mayor also said that he plans to create a new Public Safety Inspector General to "audit and monitor policing in Chicago," and a new Community Safety Oversight Board comprised of city residents to "oversee the city's entire policy accountability system."

If approved, the mayor said the new inspector general will have "impeccable credentials and credibility". It's not clear if that person will be appointed by the mayor.

Emanuel plans to present this to the full City Council in late June. If the mayor's plan is approved, IPRA's shelf-life will be nine years. Back in 2007, it replaced the Office of Professional Standards.