An ABC7 I-Team Investigation
WLS
By Chuck Goudie
CHICAGO (WLS) -- How can Chicagoans be paying so much for gasoline when motorists from coast-to-coast are paying so little?

The culprit is said to be a problem at the BP refinery in Whiting, Ind. But some officials are questioning the connection.

A southwestern Michigan senator and several other Michigan officials want the Attorney General there to investigate what's behind these suddenly surging gas prices. They question the company line that a breakdown at BP's Whiting distillery is causing such a wide ripple effect from Chicago to Detroit and the Upper Peninsula. For them - and for gas consumers - the question is: reality or chicanery?

Gas stations in Illinois, Indiana, Michigan, Ohio and Wisconsin get most of their fuel from BP's Whiting refinery. It is the largest in the Midwest and one of the world's largest that just completed a multi-billion dollar modernization, according to company records.

But in a statement to the ABC7 I-Team, BP says:

"On Saturday, Aug. 8, the Whiting Refinery in Indiana shut down the largest of its three crude distillation units for unscheduled repair work. The shutdown was executed without incident and according to protocols. While the rest of the refinery continues to operate safely, the outage has reduced production. BP is working to safely restart the unit as soon as possible. In the meantime, the company is working to meet its fuel supply obligations."

The upshot: prices at the pump.

State Sen. John Proos in St. Joseph, Mich. questions why prices would have gone up 80 cents per gallon in just a day. A "drastic and sudden increase," he calls it.

Proos is now being joined by other elected officials asking Michigan Attorney General Bill Schutte to investigate what they call an artificial hike in gas prices at a time when the price of crude oil is at recent record lows.

"We're looking at an extremely tight situation that was made much worse over the weekend with this outage and could lead to some shortages, although the high prices are also attracting gasoline supply from refiners in the Gulf Coast, but that gasoline probably won't be here for five days or a week," said Patrick DeHaan, GasBuddy.com.

There has been a clamoring of consumer complaints to Illinois Attorney General Lisa Madigan's office the past few days about spasmodic gas prices and she is monitoring the situation but doesn't have authority to investigate gas prices. They can, however, look into gouging and other illegal possibilities. 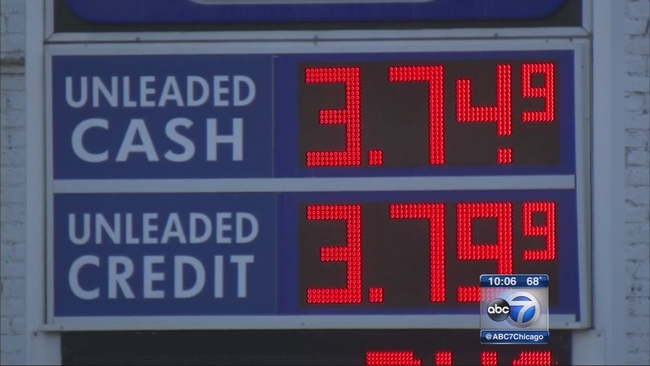