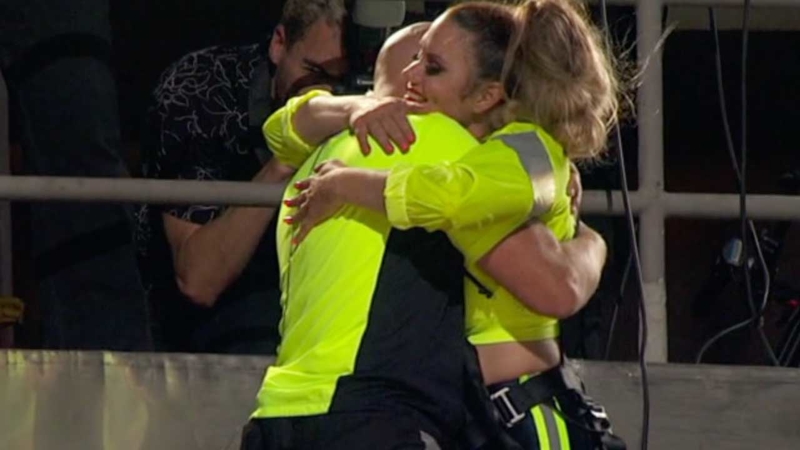 NEW YORK -- For his next stunt, Nik Wallenda will walk across an active volcano.

On Sunday night, Nik and big sister Lijana wowed the crowds in New York by walking the length of Times Square in their latest highwire stunt. It was a triumphant comeback for Lijana, who nearly died in a fall during a rehearsal two years ago.

The Flying Wallendas stopped by the ''Good Morning America'' Studios, right by the site of Sunday's stunt, to talk about their successful walk, reflect on the 2017 accident and reveal what's next.

Nik and Lijana Wallenda stopped by the ''Good Morning America'' Studios on Monday to talk about Sunday's stunt, reflect on their 2017 accident and reveal what's next.

Lijana said she had a moment of pause last night during their 25-story-high walk.

"Of course you get butterflies and a little bit sick to your stomach, like 'What am I about to do? What is wrong with my family?'" she said, laughing. "But then I remembered all the training and how hard I worked, and you have to fall back on that. I knew my ability. I knew I could do it."

But Lijana wasn't the only one who was a little nervous. Nik said that, in particular, he was concerned about the wire near 2 Times Square, where he began his walk and Lijana ended hers.

"I went up the evening before and realized it wasn't going to be as easy as I thought," he said. "So I was not only thinking about myself as I was getting on, but I was thinking about what the guys needed to do and coaching them on how to grab her when she needed to get off."

It's been less than a day since the siblings successfully completed the live stunt, but Nik is already thinking about what's next. He said he's mentioned before that he'd like to cross an active volcano. Now, he said, he's picked the volcano out and is officially putting his plan into action.