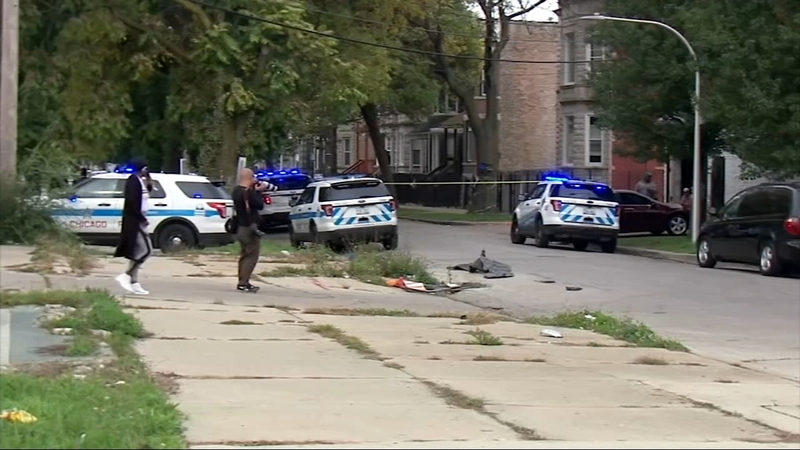 CHICAGO (WLS) -- A Chicago police officer is in the hospital after being struck by a police vehicle Thursday afternoon in the North Lawndale neighborhood.

Officials said the officer was chasing a suspect in Douglas Park near Ogden Avenue and South Drake Avenue when he was struck by a police car.

Preliminarily, officers were monitoring a funeral when they attempted to engage an armed person. As units were responding, a CPD vehicle struck an officer on foot and he was transported to an area hospital in good condition. A search for offender is ongoing.

Officers were monitoring a gang funeral in the area were following a car when they saw someone throw a gun out of the window, police said. The vehicle then took off and a short police chase ensued until the offenders abandoned the car and fled on foot.

The officer got out of his vehicle to continue the pursuit on foot and was struck by an assisting unit after turning into an alley near Ogden and Drake.

"Drove right passed me doing at least 130 and I saw his car go up on a little bump," said Sean Arie, who witnessed the incident. "He was going all over the place. It was crazy."

The officer was taken to Stroger Hospital in serious but stable condition, police said. The ambulance transporting the officer received a police escort.

CPD Spokesman Anthony Guglielmi said the officer suffered two broken ribs and a fractured orbital bone. He is expected to be OK.

He has served on the force for about four and a half years, police said.

An officer was struck by a vehicle during a police chase Thursday afternoon in the North Lawndale neighborhood.

A police officer has been struck by a vehicle in the 10th District following a pursuit of a potential gun offender. Ambulance will be escorted to the hospital - expect street closures as emergency vehicles converge on the area. pic.twitter.com/BNbINZRHh5

Officials said two suspects have been taken into custody and two others are still at large. The gun that was thrown out of the window has also been recovered.